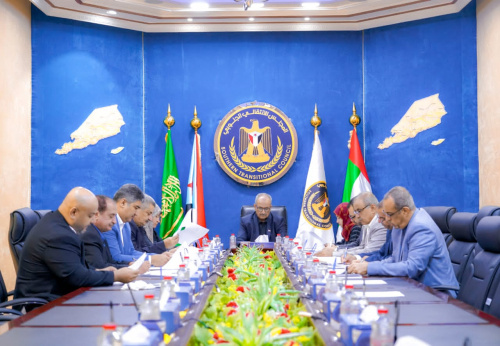 At the beginning of the meeting, the presidency of the STC stood for a minute of tribute to read Al-Fatiha for the souls of the martyrs of duty; heroes of Counter-Terrorism Forces and the Security Belt Forces in Al-Dhale'a Governorate, whose souls ascended to the Creater, in the cowardly treacherous terrorist act targeted Camp of the Security Belt Forces in the governorate, on Saturday, and the late Brigadier General Saif Shaif Hussein, Deputy head of the Joint Operations in Al-Dhale'a Axis, praying to Allah the Almighty to make their abode, with all martyrs of the South, in His paradise, and wishing a quick healing for the wounded,

The STC's presidrncy discussed a report presented by the Decision-Making Support Center, on the latest political, economic and security developments in governorates of the South, and the included recommendations, and suggestions and how to proceed it further.

The presidency also stood before role of the local leadership Executive Bodies of the STC in the governorates to work side-by-side with directors of the local authorities to animate braches of ministries, corporations, and central institutions of the State to assume responsibilities and tasks to citizens, foremost of which is providing services that concern citizens, and helping service institutions to overcome any obstacles stand before their work, and identifying any failure in the performance to enable the governors to deal with insufficiencies that may occur.The meeting also stood before orientations and agendas of the power-sharing government for the upcoming period, foremost of which is to complete implementing the provisions of Riyadh Agreement, and the outcomes of Riyadh Consultations. In this context, the presidency of the STC has renewed its keenness to assist in the implementation.

The presidency stressed on the necessitating need of the Central Bank in assuming its responsibilities to assuredly undertake stabilizing the local currency exchange rate, calling on the power-sharing government, represented by the Ministry of Industry and Trade, its branches in the governorates and local authorities to assume their responsibilities to control and  inspect prices inflation of basic necessities and food stuffs that have become exorbitant, and to put an end to the greedy tradesmen who have burdened the shoulders of citizens.

To the end of its meeting, the presidency touches on the remaining matters and topics on its agenda and took necessary measures in such regard.