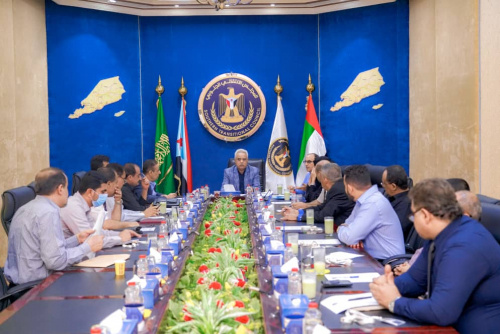 The Supreme Committee for Legal Affairs held its second meeting for the year 2022, headed by Dr. Saad Mohammed Saad, Chairman of the Committee.

At the beginning of the meeting, Dr. Saad welcomed the work team in the sections of the Specialized Committee, who were given the confidence of President Aidarous Qassem Al-Zubaidi, the President of the Transitional Council, to perform the tasks of the Committee alongside their fellow members of the Committee, stressing the need for dedication and sincerity, and to work in a team spirit to raise the Committee’s work to a level of trust that were granted to them.

The meeting discussed the arrangements made to hold the legal workshop, which marks the end of the preparation phase and the launch of its specialized work.

The meeting identified the remaining tasks of preparing and convening the workshop, which is scheduled to be held on January 18-19, and the role of the committee’s staff in participating alongside the members in its implementation.

The committee extended its general invitation to those interested in attending its inaugural session, and its special invitation to the southern legal competencies to attend and contribute to the discussion of its topics, which will contribute to exploring the southern societal vision of the role required of the Council and the committee specifically to implement its policy during the coming period.

The committee also discussed a number of topics on its agenda and took the necessary measures about them .