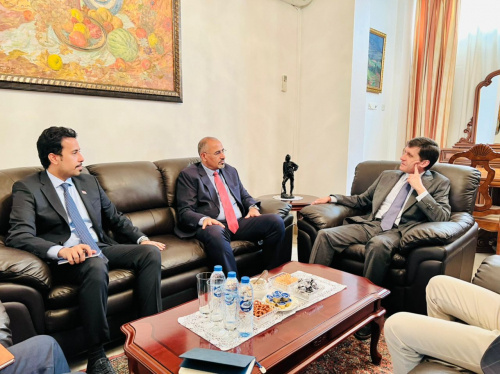 The President of the Southern Transitional Council, met on Tuesday, in the UAE capital, Abu Dhabi, with Timur Zapirov, the Russian Ambassador to the United Arab Emirates.

The meeting discussed the latest political, economic, military and security developments in the South and Yemen, in which the Ambassador listened to detailed explanation from President Al-Zubaidi on the economic situation in the governorates of the South that requires urgent solutions to protect our country and our people from a humanitarian catastrophe if the situation continues as it is.

President Al-Zubaidi talked about the importance of speeding up the implementation of the economic part of the Riyadh Agreement, and the need for the power-sharing government between the South and the north to assume its role and responsibilities, at the forefront of which is the provision of services and the payment of salaries.

President Al-Zubaidi stressed the need for the participation of Southern Transitional Council in all stages of the political process by granting the UN envoy a real mandate that accommodates the parties and the real causes of the conflict and national issues, top of which the issue of the people of the South that is represented by the Southern Transitional Council, stressing the Council's support for efforts to stop the war and bring peace to the region. .

President Al-Zubaidi also stressed the need to complete the implementation of the Riyadh Agreement and enable the government of power-sharing to carry out its tasks, combat corruption, unify efforts to confront Houthi militias and terrorist groups, and the importance of combating smuggling and illegal immigration and protecting maritime shipping lanes in Bab al-Mandab, the Gulf of Aden, and the Red Sea, praising the role of the Arab Coalition led by the Kingdom of Saudi, and the countries that are sponsoring the political process, in reaching urgent solutions.

For his part, the Ambassador of the Russian Federation expressed his country's support for peace and stability in our country, praising the role of the Transitional Council and stressing the need for its presence in the comprehensive political process to ensure comprehensive and lasting solutions.