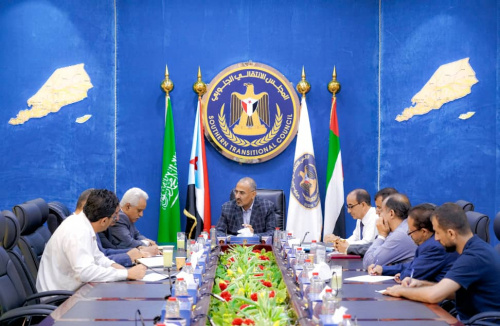 The President of the Southern Transitional Council, President Aidarous Qassem Al-Zubaidi, chaired on Tuesday, a meeting of the Supreme Committee for Legal Affairs.

President Al-Zubaidi stressed the importance of the role that the Legal Committee will play during the next stage, as it is the controlling body for any organizational, political or economic work.

President Al-Zubaidi added: "The Southern Transitional Council is looking forward to building a professional legal body, and this is what prompted us to choose these competencies at this stage," stressing the need to go in parallel with the laws, which advance the Council's work and preserve its achievements.

President Al-Zubaidi concluded his speech, directing the legal committee to quickly develop an action plan that would have the force of law and the judiciary to decide any issue.

In turn, the Chairman and members of the Supreme Committee for Legal Affairs thanked President Al-Zubaidi for his confidence in them and for choosing them for this national mission, expressing their willingness to work seriously for the benefit of all.

In conclusion, the attendees presented a number of proposals, including assigning two members of the Legal Committee who are related to human rights to follow up the case of the Yemeni youth, Abdul Malik Al-Sanabani, so that the judiciary can take its course, in addition to a number of proposals that would serve the people of the south, their cause, rights, and legitimate demands.