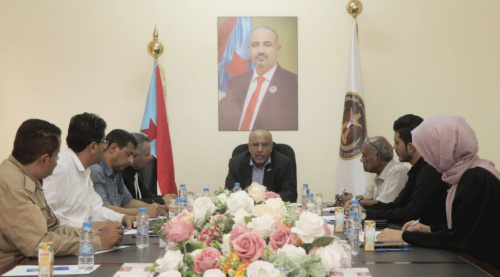 The National Southern Media Authority held, on Tuesday, its periodic meeting headed by Ali Abdullah Al-Kathiri, member of the Presidency of the Transitional Council, head of the authority.

At the beginning of the meeting, the Authority reviewed the peaceful protests in the governorates of the South that denounce the economic, living, and service collapse, calling on for the need for these protests to keep its peacefulness, and not to allow the forces lurking to penetrate and direct them towards provoking chaos, riots and damage to public and private interests.

The National Southern Media Authority called on all free men and women of Shabwa governorate to actively participate in the peaceful protest of September 15 in all districts of the governorate, to express their categorical rejection of all practices, violations, arrests and kidnappings practiced by the militia of Brotherhood against the people of the governorate.

In the same context, the National Southern Media Authority directed all the southern visual, print and audio media outlets to cover these popular demonstrations that are condemning the deterioration of services and corruption of the Brotherhood militia, and their suffering due to the deterioration of services resulting from the failure of the Prime Minister and some ministers to return to the capital, Aden, and to make their voice be heard, and what they suffer from to reach to the world.

The meeting touched on the Southern National Dialogue to be launched during the coming period upon the call of President Aidarous Qassem Al-Zubaidi, the President of the Southern Transitional Council, in which the Authority stressed in the context the need for continuous media support for this important event, and assigning each related sector to make its own plans in this regard.

The Authority concluded its meeting by discussing a number of developments, topics and issues related to the work of the media sectors during the coming period and took the necessary measures in this regard.