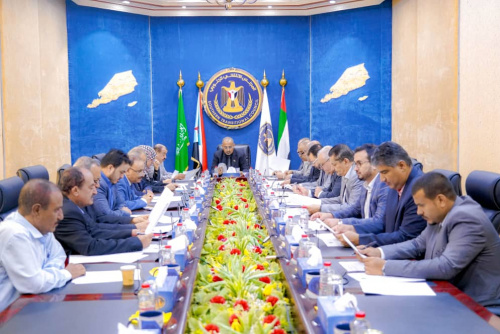 The Presidency of the Southern Transitional Council held today, Monday, its periodic meeting, chaired by President Aidarous Qassem Al-Zubaidi, the President of the Council.

At the beginning of their meeting, the attendees stood for a minute of silence to recite Surat Al-Fatihah on the souls of the martyrs of the Southern Armed Forces, who got martyred on Sunday, in terrorist attacks by missiles of the criminal Houthi militia on Al-Anad Air Base, praying to the Almighty Allah to grant the wounded a speedy recovery.

The meeting was attended by the Council’s ministers in the parity government, in which the Presidency of the Council elaborated on the details of the treacherous terrorist crime committed by the abusive Houthi militia that bombed with ballistic missiles and drones the training center of the Southern Armed Forces at Al-Anad Air Base in Lahj governorate, stressing that this criminal persistence of that terrorist gang clearly reveals the insistence of these militias to refuse peace and to further reignite their war of aggression, and also reflects the state of inability that deepens in these militias to make any field progress towards our southern fronts, and the bitterness of defeats they suffered by the hands of the heroes of our southern armed forces on all fronts of fighting, and to use instead its cowardly missile attacks.

The Presidency of the Southern Transitional Council called on the brothers in the Arab coalition to do what is dictated by the duty of partnership with them to enable the armed forces to obtain qualitative weapons to deter these terrorist militias and provide the requirements to protect the capital, Aden, and all liberated governorates from missile attacks and drones that flow into those militias from Iran.

The meeting also dealt with a number of issues and topics related to the work of the council bodies, and took the necessary measures in this regard.