On sidelines of 47th  session of United Nations Human Rights Council in Geneva.. 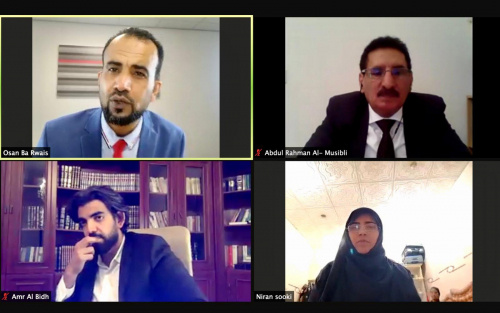 The European Office of the General Directorate of Foreign Affairs of the Southern Transitional Council organized on Wednesday, a human rights symposium on the sidelines of the 47th session of the United Nations Human Rights Council, entitled “Aligning the contents of the Riyadh Agreement with human rights issues in the South.”

In his intervention, Mr. Amr Al-Bidh touched on the consequences of signing the Riyadh Agreement by the Transitional Council, and its contents that aimed at restoring the rights of citizens, improving the service conditions and alleviating the suffering of people's living, explaining that one of those outcomes is the political solution that is the right of citizens in the South, stressing that the President of the Southern Transitional Council, President Aidarous Qassem Al-Zubaidi pays great attention to ensure providing services to citizens and to avoid being subjected to any political blackmail.

In turn, the lawyer Niran Sooki explained the suffering of the people of the south as a result of the deterioration of their living, and the government’s abandonment of its agreed obligations in the Riyadh Agreement, indicating that the anti-south forces are committing daily violations, including arrests and provocations of leaders of the Transitional Council in Shabwa and Hadramout, and these forces continue to build their military forces in Shokra, with the aim of complicating the situation and threatening the security and peace of the region, stressing that "the southerners' choice is either victory or death."

In an intervention by Dr. Salem Al-Shabhi, Head of the Health and Environment Committee of the National Assembly, he touched on the health conditions in the south, and the deterioration that the people are suffering from as a result of the government’s lack of interest in them, indicating the state of rogue hospitals and the situation of the medical and health staff in light of its response to the Covid-19 pandemic, which claimed many lives, including doctors and health professionals, due to the lack of the simplest capabilities to confront this dangerous pandemic, considering this to be murders against fellow professionals.