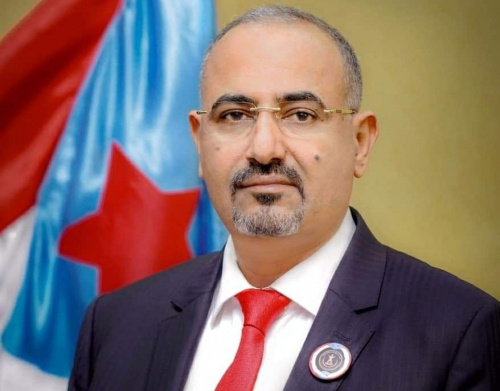 The President of the Southern Transitional Council, Supreme Commander of the Southern Army and Security Forces, President Aidaroos Qassem Al-Zubaidi, delivered an important speech to our southern people at home and abroad, on the occasion of the twenty-seventh anniversary of the disengagement declaration on May 21, 1994.

Praise be to Allah, Lord of the worlds, and blessings and peace be upon His honest and faithful Messenger, and upon all his family and companions.

Peace, mercy and blessings of Allah on you

Today we have the twenty-seventh anniversary of the declaration of disengagement on May 21, 1994, from the project of unity that was aborted by the forces of Sana'a regime, by declaring war on the South and occupying it, and opting to turn it into an occupation that violates the land and kills the people, and since then our people have made enormous sacrifices in a legendary national struggle to restore their state, and we are still walking on the same path for which our martyrs scarify their souls, and we will not hesitate or lean until our people achieve the restoration and building of their independent, federal and fully sovereign southern state.

Today we are passing through a pivotal stage of our people's struggle, in which great national gains have been achieved, in which the arrogance and intransigence of the renewed old forces of Sana'a regime increased against our people, dedicating to the policy of collective punishment, breeding of terrorism, and spreading of chaos, and plundering public money, and using it to buy off people and try to tear apart the southern social fabric, thinking that this approach will achieve its goal, but far away of it, it speeds the date of ending its occupation in all its forms.

After the 1994 war, the enemies of the South were able to finish off the capabilities of the southern army and security by dismantling, assassinations, discharging and retirement, but we - with the help of Allah Almighty - were able in recent years, and after the enormous sacrifices made by the southern resistance, to build an army and security with a solid South, Arab, national belief, which despite their early life, have been able to liberate large parts of the South lands, and achieved remarkable successes regionally and internationally in combating terrorism, establishing security, and protecting public and private interests, and today, they become a source of pride for the people of the South, and everyone should contribute in facilitating the implementation of their national duties.

We affirm that we are working to develop the southern defense and security system to ensure its ability to perform its military and security tasks in accordance with institutional frameworks that achieve the full ability to establish security and protect the South from all threats and dangers.

Sons of our southern people at home and abroad

What our southern people suffer from today, as a result of the deliberate economic and service collapse, is nothing but an extension of the practices of the occupation forces that seek to break the morale of the southerners, to break their will, and push them to retreat from their national project, and on top of these forces' ways is the disruption of public services, and we, at the Southern Transitional Council, have worked to give this file the priority through our participation in the parity government, and we were keen to make the electricity and water file at the forefront of service projects that the government should have provided upon its arrival in Aden the capital.

However, the obligations, that were the most prominent of which was the launching of the Petromasila station and the Haswa 2 station into service before March 2021, were not implemented, rather, the process of disruption and unjustified postponement continued, and we in the Southern Transitional Council, and for the suffering of our people, we confirm that we will not be far from feeling the concerns of citizens, providing the general services, and getting basic needs, and we will have a set of options and administrative procedures necessary to address the situation of services, including a complete review of energy sources.

We salute the patience of our proud people, and we affirm that their patience and insistence despite the difficult living conditions is a clear expression of their patriotic awareness and their close connection with their national cause, and this is greatly appreciated, valued, and of pride for us in the leadership of the Southern Transitional Council, as this people has proven that they are moving towards their national goal with a solid will and sincere belief.

We affirm the support to our great southern people in the peaceful expression of their demands and rights, and our standing by their side, and our full readiness to lead the ranks in defending their right and protecting it from all illegal conspiracies and practices targeting their life, dignity, political future, and their right for a decent life, as well as, at the same time, we will not allow any sabotage operations targeting public and private property that threaten security and social peace in all the cities and governorates of our beloved South.

We, at the Southern Transitional Council, affirm our strategic partnership with the Arab Coalition led by the Kingdom of Saudi Arabia, and our regional and international partnership in the efforts of combating terrorism and extremism. We also renew our adherence to the Riyadh Agreement and the need to complete the implementation of its provisions, and we stress our support for a comprehensive cessation of war and entering into a comprehensive political process that accommodates the actors on the ground and resolves the real causes of the conflict, and at the forefront of that is the issue of the people of the South, and we refer to the need to respect all UN resolutions, on top of which are Security Council Resolutions 924 and 931 of 1994.

We reiterate our call for the return of the parity government emanated from the Riyadh Agreement to the capital, Aden, to assume its responsibilities, and to perform the tasks for which it was formed, foremost among which is providing public services, payment of salaries, and addressing the economic crisis through the implementation of the economic part of the Agreement, and we stress that the no-return of the government to Aden the capital, or the attempt to open ministries' headquarters outside the capital, Aden, is nothing but a real disruption of the Riyadh Agreement, and even an undermining and targeting of the efforts of the Arab Coalition led by the Kingdom of Saudi Arabia, for the sake of hostile projects.

We salute the heroes of our southern armed forces and security in various positions of honor and heroism, as they draw the most wonderful pictures of courage, bravery, and persistence to defend the southern homeland and protect its people from various threats, and we call on all security and military units to raise the level of vigilance, caution and full readiness to confront any terrorist acts targeting the security and stability of the South.

May Allah have mercy on the righteous martyrs of the South, and speedy recovery of the wounded heroes, and freedom for our honorable prisoners, and we will continue on their path until the restoration and building of the independent federal state of the South.