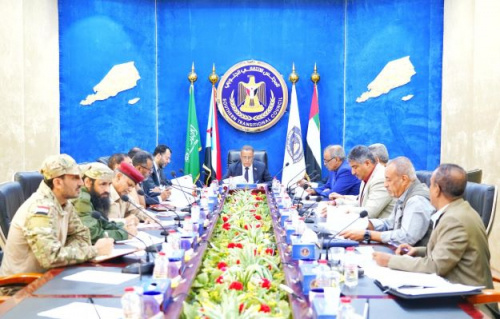 The Presidency of the Southern Transitional Council held its first periodic meeting for this week on Saturday,, headed by Dr. Nasser Al-Khobaji, Acting President of the Council, Head of the Negotiations Affairs Unit.

In its meeting, the Presidency discussed the most prominent security and military developments in the southern arena in general and the governorates of Abyan and Lahj in particular, and the continuing attacks by the terrorist Brotherhood militia against the security belt forces in Ahwar district, and Khobar Al-Marakisha in Khanfar district, with the aim of imposing a new reality on the ground for the interest of terrorist forces and enabling them to move and reach freely to the coast and other areas, in a flagrant defiance of the Riyadh Agreement, and the calm efforts aimed at preparing the conditions for the comprehensive settlement process.

In the meeting, which was attended by representatives of the Transitional Council from among the ministers in the government of parity, and the director of security in the capital Aden, and the director of Lahj security, and the commander of the backup and support brigade, and commander of al-Asifah brigades, the Presidency reviewed the innovations, crowds, and recruitment processes taking place in Tor al-Baha front in Lahj governorate,

what Tor al-Baha front in Lahj is witnessing of building, deployment, and recruitment operations, and the creation of camps and opening of roads for the Muslim Brotherhood militia, according to suspicious agendas and illegal actions within the plan to declare war on the south, and the efforts of the Arab coalition and the international community, and the necessary political solution requirements.

The Presidency condemned these actions aimed at creating chaos and disturbing the public tranquility, stressing at the same time that the southern armed forces should be ready to face these challenges, take the necessary measures, and keep all possibilities open on more than one level, to defend the gains of the people of the South and uncover the wrongdoers and stalkers with the security and stability of the homeland.

The Presidency also called on the intelligence and reconnaissance services to monitor all movements, suspicious gatherings and smuggling acts, and attempts to transfer weapons to the capital, Aden, and inform the coalition of what is necessary in this regard.

The meeting also continued to stand on the performance of the parity government in fulfilling its obligations in providing services and salaries, controlling the economic situation and the exchange rate, following the announced support from the Kingdom of Saudi Arabia for oil derivatives, electricity fuel, and the transferring of the deposit to the Central Bank.

In this regard, the Presidency stressed the speedy determination of these issues, to improve the services provided to citizens and rationalize the practices of some ministers that disrupt partnership and the entitlements of the public job, as well as military, security and civil leadership positions, the right to qualification, university education and foreign scholarships in accordance with the correct standards, away from political employment, party use and exclusivity of decision without any right.

In conclusion, the Presidency of the Southern Transitional Council extended its warmest congratulations and blessings to the people of the great south at home and abroad, and their armed forces stationed in the arenas and fields of honor and heroism, and to the brothers in the region, and the rest of the Arab and Islamic countries on the occasion of the blessed month of Ramadan, asking Allah Almighty to make it a good and blessing month that fulfilling the hopes and aspirations of the people of the South for independence, liberation, sovereignty, achieving peace and harmony, and draining the sources of extremism and terrorism in all its forms.