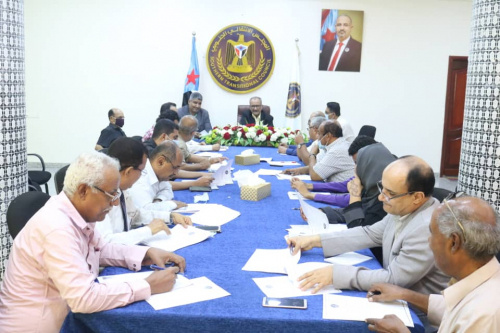 The General Secretariat of the Presidency of the Southern Transitional Council held its periodic meeting on Monday, chaired by Mr. Fadl Muhammad Al-Jaadi, Deputy Secretary-General, and in the presence of Eng. Nizar Haitham, the member of the Council's Presidency, Head of the Executive Authority of the Local Leadership of the Council in Aden the capita.

The General Secretariat also reviewed the performance report of the Administrative and Financial Department, which contained a detailed explanation of the activities and works carried out by the department during the period January - March of the year 2021.

The meeting reviewed a number of issues related to the security, military and economic aspects, foremost of which are the continuous power cuts and the failure to pay salaries to the military and civilians.

The meeting stressed the importance of the concerned authorities in state institutions assuming their duties in lifting the burden of suffering on the citizens, and monitoring the prices of foodstuffs as the blessed month of Ramadan is approaching.

The meeting had also reviewed the assignments entrusted to the General Secretariat and its departments, as well as the report on the activities of the departments during the past week, in addition to reviewing and approving its previous minutes.