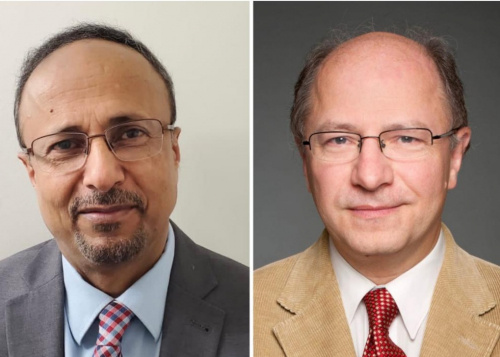 The Director of the Office of the General Administration of Foreign Affairs of the Southern Transitional Council in Canada, Abdul Karim Ahmed Saeed, hold discussion on Saturday, with Professor John Baker, Director of Human Rights Research and Studies at the University of Ottawa, the expert in international conflicts of the United Nations, former advisor to the United Nations representative for Yemen, Jamal bin Omar.

During the meeting, which was held by phone, Saeed discussed with Professor Baker some of the roots of the conflict and developments in the Yemeni and southern arena in particular, and the importance of implementing the Riyadh Agreement, and the recent initiative of the Kingdom of Saudi Arabia to stop the war and establish peace.

The meeting touched on the human suffering in the south as a result of systematic collective punishment against the people of the south, even after the formation of the new government, which make humanitarian catastrophe and chaos might be difficult to control if the difficult economic conditions are not addressed quickly.

Regarding the recent invitation of the Kingdom of Saudi Arabia, Saeed affirmed that the Southern Transitional Council welcomes it out of its keenness to stop the war and bring peace, as it is an important party in it, stressing the importance of its participation in all peace steps in Yemen and its support for the efforts of the UN representative Martin Griffiths.

For his part, Professor Baker explained the importance of observing the human and political rights of citizens, and that it is the right of peoples to live in security, stability and peace, away from all forms of injustice, oppression and human suffering, which may negatively affect the living life of citizens, which generates violence and chaos within society.

Baker stressed the importance of resolving differences through political settlements and by peaceful means and dialogue and not resorting to violence and force, and serious work to stop the war with effective international guarantees, expressing his hope that the recent Saudi initiative will achieve a response from all parties to stop the war and sit at the table of dialogue and a comprehensive political settlement.

The meeting discussed a number of common issues and work to develop the relationship between the Office of the General Administration of Foreign Affairs of the Southern Transitional Council in Canada and the Research and Studies Center for Human Rights at the university, and coordination of some human rights and humanitarian activities organized by the Center for Research and Studies for Human Rights.