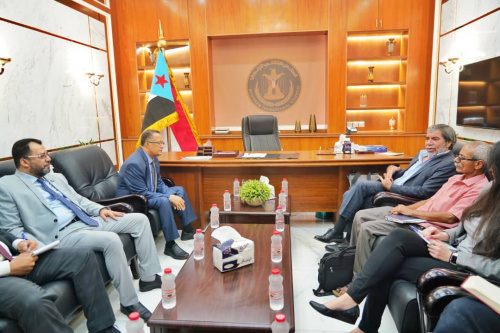 The meeting discussed developments in the political situation, and the difficulties facing the implementation of the remaining measures of the Riyadh Agreement.

Al-Khobaji stressed that the Southern Transitional Council seeks to achieve security and peace in the country, and an agreement with the government of parity to set common agendas to confront Al-Houthi according to the Riyadh agreement, while at the same time adhering to its principle and its strategic goal of restoring the state of the South on its entire borders before May 21, 1990.

Al-Khobaji added that the Southern Transitional Council has the intention to continue its approach in leading the Southern dialogue with all figures and active forces on the ground in order to achieve national consensus, and to unify southern efforts to face the challenges that target the South, land and people.

Al-Khobaji stressed on the Transitional Council openness to all Southern powers, in a way that prioritizes the supreme interests of the South over others.

Al-Khobaji stressed the importance of speeding up the formation of the joint negotiating delegation, and reconfiguring and activating the Supreme Economic Council, the Central Organization for Control and Accounting, and the National Anti-Corruption Commission, as well as restructuring the ministries of interior and defense in accordance with the contents of the Riyadh Agreement.

For his part, the director of the UN envoy’s office in Aden, Marwan Al-Ali, stressed the need to complete the implementation of the Riyadh Agreement, to start the comprehensive political process and to stop the bloodshed.

Al-Ali pointed out that there is a positive international impression on the Transitional Council’s handling and interactions with flexibility with the government and its unlimited cooperation to perform and succeed in its duties in Aden the capital, and the southern governorates.

The meeting was attended from the Transitional Council side by Eng. Adnan Al-Kaf, member of the Presidency, and Anis Al-Sharafi, member and reporter of the Negotiations Affairs Unit, and Rafat Saleh Abdel-Hamid, official of organizations affairs at the General Directorate of Foreign Affairs in the capital, Aden. And the meeting was attended from the office of the UN envoy in Aden by Eliana Ovecheva, Aziz Salem, and Hadeel Samir.