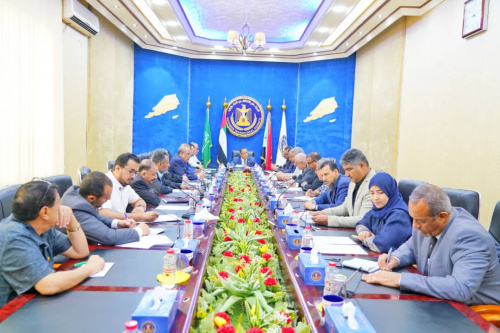 The Presidency of the Southern Transitional Council held on Saturday, its periodic meeting headed by Dr. Nasser Al-Khobaji; member of the Presidency; Acting President of the Council, Head of the Negotiations Affairs Unit, and in the presence of the Transitional Council Ministers of the parity Government and the Director of Security in Aden the capital.

At the opening of the meeting, the attendees stood for a minute of silence to read Al-Fatiha for the soul of the late Dr. Nageeb Ibrahim Salman, Head of the Studies and Researches Department at the General Secretariat of the Presidency of the Council, who died at dawn on Saturday.

The meeting, which was also attended by the Director of the Transitional Council President's Office, discussed many issues in the southern arena, and the Presidency of the Transitional Council stressed the need to move forward in implementing the remaining provisions of the Riyadh Agreement, in a way that contributes to enhancing security and stability in the south and uniting efforts to confront the Houthi militia, and the terrorist organizations and common dangers.

The meeting discussed the deteriorating economic and living conditions, and the continuous collapse in the value of the local currency exchange, and in this regard, the Presidency stressed the need for the government to assume its roles in addressing the citizens' conditions, relieving the burdens on their shoulders, and building public institutions, and reconstruction.

During the meeting, the minutes of the previous meeting were reviewed, discussed and approved, as well as the Presidency listened to the Acting President’s review of the most prominent developments in the national arena, in addition to a report on the performance of the Chairmanship of the National Assembly and its committees during the past two weeks.

The meeting also dealt with a number of political and organizational issues and took the appropriate decisions and measures in this regard.