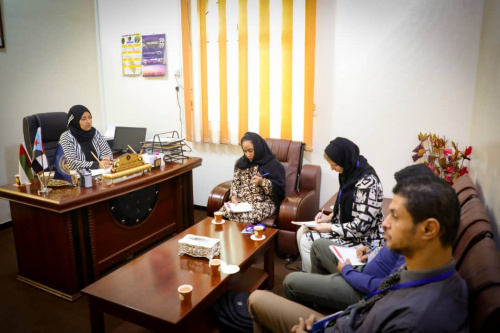 The member of the Presidency of the Southern Transitional Council, Vice Chairman of the National Assembly, Lawyer Niran Sooki, met on Sunday, received in her office in the National Assembly Ms. Dina Al-Maamoun, Director of Geneva Call Organization, and Ms. Kathleen Longden, coordinator of the organization's programs in Yemen office.

In the meeting, which included Dr. Abdullah Basohaib, Head of the Human Rights Committee in the National Assembly, Sooki presented detailed explanation of the crimes and violations that have been committed in the South since 1990 to the present day, noting the pivotal role played by the leadership of the Southern Transitional Council in monitoring these violations and crimes, and submit them to the international organizations concerned with this matter, in order to convey a clear picture to the countries in the region and the world of all that has been violated in the South for many years, confirming that they are war crimes and will not be subject to statute of limitations.

Sooki stated that the Southern Transitional Council worked on communicating with the Commission for Human Rights through the Council’s representative for the human rights file at the Presidency in Geneva, as well as through the Commission’s office in the capital Aden, in addition to communicating with all human rights organizations, and presenting and delivering those files to them.

For her part, Ms. Dina Al-Maamoun expressed her thanks and appreciation to the lawyer Niran Sooki for the detailed and clear presentation of all the violations committed against the South, praising the organized human rights work carried out by the leadership of the Southern Transitional Council and all the departments and human rights committees working under its roof.