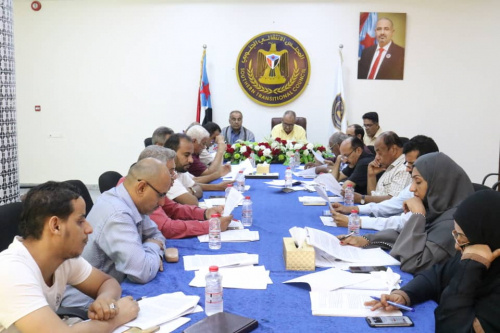 The General Secretariat of the Presidency of the Southern Transitional Council held its weekly periodic meeting, on Monday, headed by Mr. Fadl Mohammad Al-Jaadi, Deputy Secretary-General, and in the presence of Brigadier Nasser Al-Saadi, member of the Council's Presidency.

The meeting discussed the implications of the recent one-sided Yemeni presidential decisions and their violation to the Riyadh Agreement, stressing that the Transitional Council has always emphasized the importance of implementing the agreement to achieve the hopes and aspirations of the people of the south, indicating that with the Riyadh Agreement and with regional and international sponsorship, the Transitional Council has become a real and realistic partner that cannot be overcome and will not allow this.

The meeting called on the sponsor of the Riyadh Agreement, represented by the countries of the Coalition, to assume their responsibilities towards the breaches against the Riyadh Agreement and its implementation, the most of which are the one-sided Yemeni presidential decisions that contradict what was agreed upon.

In the meeting, the General Secretariat previewed a report on the political scene submitted by the Political Department, which reviewed the most prominent political developments in the southern arena, including the implications of recent presidential decisions and their violation of the Riyadh Agreement and its details.

The political report also pointed to the political effects of provocative military measures contrary to the coalition's plan to accelerate the implementation of the Riyadh Agreement, which is represented by the Brotherhood militias re-deploying their forces in some front sites in the Shokra front, and the report also included a number of other political issues on the national arena.

The meeting dealt with the latest economic, security, and service developments in Aden the capital, and the southern governorates, including the outstanding crises and difficulties in these aspects, and the proposed solutions for how to overcome these difficulties.