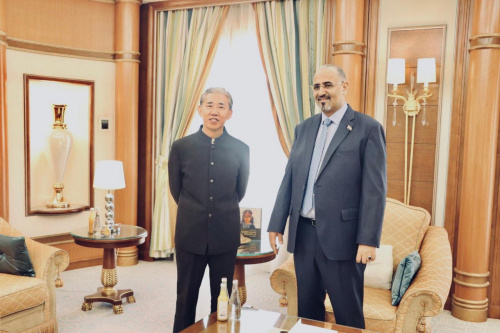 The President of the Southern Transitional Council ,Supreme Commander of the Southern Armed Forces, President Aidaroos Qasim Al-Zubaidi, received, on Tuesday, at his residence in the Saudi capital Riyadh, the Chinese ambassador to Yemen, Mr. Kang Yong.

The meeting discussed various related files, especially with regard to the future of the work of the power-sharing government, and opportunities to support the economy, public services, normalization of life, and the comprehensive peace process, as President Al-Zubaidi emphasized the great efforts made by the Arab Coalition countries led by the Kingdom of Saudi Arabia at various levels.

President Al-Zubaidi affirmed that the formation of a power-sharing government between the south and the north represents a basic stage within the steps of implementing the Riyadh Agreement, indicating that the government has important and central files in the forefront of which is addressing the economic crisis, providing services and salaries, rebuilding state institutions and providing an appropriate environment to alleviate the suffering of citizens. .

President Al-Zubaidi talked about the historical relations that bind the people of the south with the friendly Chinese people, stressing the need to revive and strengthen bilateral relations between the two countries, especially with regard to economic partnership in the Silk Road project, and support for development programs and infrastructure in our country.

For his part, the Chinese ambassador appreciated the council’s stance and support to reach the implementation of the acceleration mechanism of the Riyadh Agreement, pointing out that the announcement of the formation of the government is a real success that gives rise to optimism, stressing the strength of relations between China and our country, explaining that the next phase should discuss mainly economic opportunities, stressing that our country's strategic position regarding the future of the Chinese economy with the world, and again his country's position in support of a comprehensive peace process in our country.