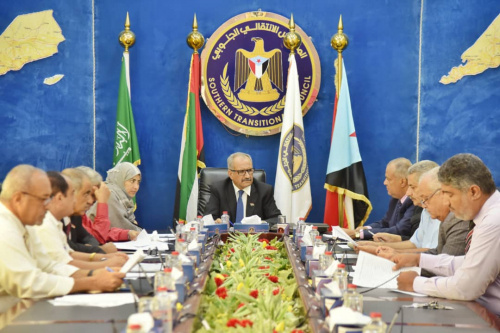 The Presidency of the Southern Transitional Council held on Sunday, its regular meeting, headed by Mr. Fadl Mohammad Al-Jaadi, the Assistant Secretary-General of the Presidency.

The meeting discussed the latest developments on the southern national arena, foremost of which was the important meeting that brought together President Aidaroos Qassem Al-Zubaidi, the President of the Southern Transitional Council, with President Abdo Rabbo Mansour Hadi, in the Saudi capital, Riyadh, and the positive results that the meeting produced.

The Presidency of the Council praised the efforts made by the President Aidaroos Al-Zubaidi, to push for the full implementation of the Riyadh Agreement and the mechanism to accelerate it, stressing that such meetings represent a real opportunity to advance the crisis file in general, with its political and military dimensions, and the southern file in particular and at all levels.

The meeting praised the efforts of Mr. Ahmed Hamed Lamlas, the Secretary General of the Presidency of the Council, the Governor of the Capital Aden, during the last period, which resulted in the resolution of many files and issues, foremost of which are the services file, and the issue of illegal extension on lands, and the random construction, on the way to full normalization for the life in Aden the capital, as well as his tangible efforts to follow up the payment of the salaries of southern army and security personnel.

After that, the meeting discussed the perceptions presented by the members of the Presidency regarding organizing the work of the media affiliated to the Council, and possible measures to strengthen them, and solving the problems they encounter, in a way that ensures the raising of their efficiency and the quality of the content they provide.

The meeting reviewed the weekly activity report for each of the General Secretariat of the Presidency, and the Presidency of the National Assembly and its administrative body, as it was discussed by the members before it was approved.

The meeting dealt with a number of topics and miscellaneous items included in its agenda, and took the necessary action in this regard

In the conclusion, the meeting wished a speedy recovery for Major General Ahmed Said bin Brik, the Chairman of the National Assembly, who travelled to the Egyptian capital, Cairo, for some medical examinations.