President Al-Zubaidi receives the United Kingdom Ambassador and his deputy

President Al-Zubaidi receives the United Kingdom Ambassador and his deputy 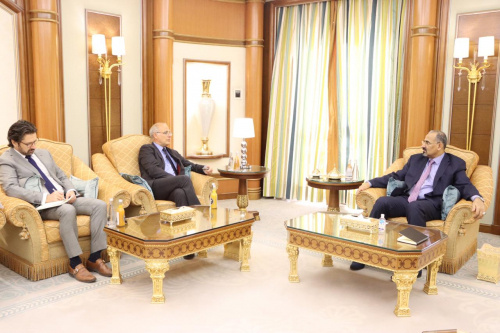 The President of the Southern Transitional Council, Supreme Commander of the Southern Armed Forces, President Aidaroos Qasim Al-Zubaidi, received on Monday, at his residence in the Saudi capital, Riyadh, the United Kingdom's ambassador to Yemen, Mr. Michael Aaron, and his deputy, Mr. Simon Smart.

In the meeting, they discussed opportunities for peace and stability in our country, and emphasized that the Riyadh Agreement represents an important and pivotal milestone on the road to the comprehensive political process, appreciating the great role that the Kingdom of Saudi Arabia and the United Arab Emirates lead in implementing the agreement.

President Al-Zubaidi praised  the roles of the United Kingdom through its work in the United Nations Security Council and the United Nations organizations with its support to achieve peace in Yemen and the South, stressing that the Southern Transitional Council relies heavily on Britain's role in supporting peace and stability efforts.

President Al-Zubaidi reaffirmed that the Council supports the efforts of the Special Envoy of the Secretary-General of the United Nations to lead the comprehensive political process, stressing on the need to deal with the active forces on the ground and not bypassing them, stressing also that there is no peace without taking into account the demands and aspirations of the people of the South, as they have the right to self-determination of their satisfaction, and affirmed the Transitional Council’s readiness to participate in the process, stressing on the impossibility of any real solutions without real and complete representation of the South at the negotiating table.

For his part, the British ambassador praised the positive engagement by the Transitional Council, which was reflected in its clear and supportive positions for the implementation of the Riyadh agreement, adding that the Council’s participation and the cause of the people of the South is a fundamental issue in the path of a comprehensive political solution.