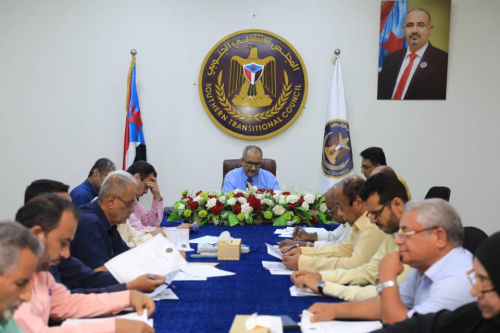 The General Secretariat of the Presidency of the Southern Transitional Council held on Monday, its regular meeting in the capital Aden, headed by Mr. Fadl Mohammad Al-Jaadi, the Assistant Secretary-General.

The meeting discussed the organizational performance report of the local authorities in the governorates for the month of August 2020, submitted by the Organizational Department, including the activities of local leaderships and the level of discipline related.

The meeting reviewed the performance report of the Studies and Research Department at the General Secretariat for the period January - August 2020, including all of the department's activities and what was accomplished by it during the mentioned period.

The meeting discussed a proposal to conceive of the glorious activities of the upcoming national celebrations of October 14 and November 30, and the preparations of holding these events.

The meeting reviewed the reports of the weekly activities of the General Secretariat departments during the fourth quarter of September 2020, in addition to a number of updates in the local arena, as well as reviewed and approved its previous minutes.