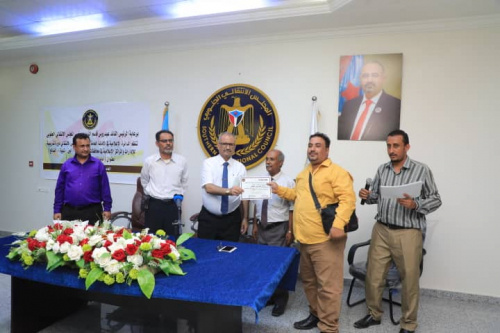 The Media Department of the General Secretariat of the Presidency of the Southern Transitional Council honored on Sunday, the participants in the session of preparing TV reports for the media of departments and media centers in five governorates on the conclusion of the training course.

The honoring ceremony, which was attended by Mr. Fadl Al-Jaadi, the Assistant Secretary-General of the Presidency of the Southern Transitional Council, came as a result of the efforts made by the participants, who are from the governorates of (Aden - Lahj - Abyan - Shabwa - Al Dhale'e), over a period of two days in training on television reporting in both sides of preparation and editing, and other skills related to photography, and lectures on television reports, television photo techniques, and correspondent descriptions, which were delivered by Dr. Abdullah Al-Haw, Head of the Media Department, and a number of other specialists in this field.

The participants underwent practical tests at the end of their session by dividing them into working groups that were formed to prepare visual reports, before subjecting them to evaluation by specialists.