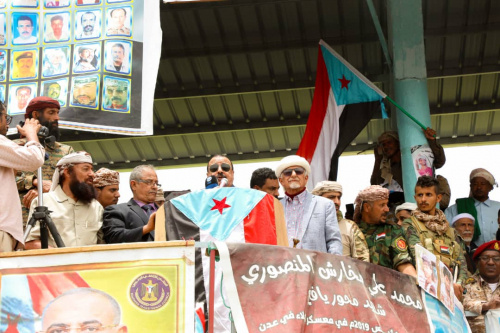 The Chairman of the National Assembly of the Southern Transitional Council, Major General Ahmed Saeed bin Braik, and Mr. Fadl Mohammad Al-Jaadi; the Assistant Secretary-General of the Presidency of the Southern Transitional Council, and Sheikh Abdul Rab Al-Naqib, member of the Presidency of the Council and their accompanying delegation, witnessed the inauguration ceremony of Yafea Annual Heritage Festival, which was launched on Saturday, in Labous district.

Major General Bin Brik delivered a speech on the occasion, during which he conveyed to the participants the greetings of President Aidaroos Qassem Al-Zubaidi, the President of the Southern Transitional Council, Supreme Commander of the Southern Armed Forces, and his congratulations to them on the occasion of Eid Al-Adha and the victory anniversary.

Major General Bin Brik said: "Our participation in this festival with our brothers and our sons in Yafea has come according to the directives of the political leadership represented by President Aidaroos Al-Zubaidi, and with the participation of the sons of Yafea in their celebration of the ninth anniversary of the liberation of Jabal Al-Ar and the third anniversary of the establishment of the Southern Transitional Council."

Major General Bin Brik added: "We have come to you from all the southern governorates, from Aden the capital, Al Dhalea, Socotra, Al Mahra, Abyan, Hadramout, and Shabwa, to witness with you this festival for the original Yafea."

Bin Brik continued: "We do not miss here to remember with all reverence the martyrs of the south from the sons of Yafea who wrote most wonderful epics in defending the land of the south and its cause, including with them Major General Ahmed Saif Al-Yafei, Tamah, Nabil Al-Quaiti, Al-Haddy, Abu Al-Yamamah, and many others of whom the south is proud of."

Major General Bin Brik affirmed that he would convey the message that the sons of Yafea conveyed to President Al-Zubaidi to move forward towards achieving the goals of the people of the South, and that they will remain in the covenant and with every step that the Council, under the leadership of President Aidaroos Al-Zubaidi, takes to achieve the goals and aspirations of the southerners.

Major General Bin Brik, affirmed on behalf of the President Aidaroos Al-Zubaidi, assured the sons of Yafea and the south in general that they stand with their people and achieve their goals, in which he said: "We will not let you down towards independence and achieving victory."

In his speech, Major General Bin Brik praised the role of the Arab Coalition, by saying: "To our brothers in the Coalition, we are with you and we will preserve the pledge and appreciate all your sacrifices, and together we will be one victorious line in facing any threats on all fronts."

At the end of his speech, Bin Brik valued the role of the southern men, who endured the hardship of traveling from all the southern governorates to attend Yafea annual Heritage Festival.

The ceremony, which was attended by the undersecretary of Lahj governorate; Major General Saleh Al-Bakri, and Mr. Awad Al-Salahi, and a number of heads and members of local leaders and the local authority, and a large gathering of citizens, included sections of "Al-Bara" youth dance performed by teams from all youth centers using traditional knives "Janabi", old rifles and Hemyari swords, mixed with folk songs and poetries, in which they revived the traditions of their ancestors and the legacy of thousands of years ago.

Yafea Festival this year is coincided with the revival of the ninth anniversary of the liberation of (Al-Ar) region, and the third anniversary of the establishment of the Transitional Council, and the renewal of support and confidence in the political leadership of the Council represented by President Aidaroos Qassem Al-Zubaidi, the President of the Southern Transitional Council.