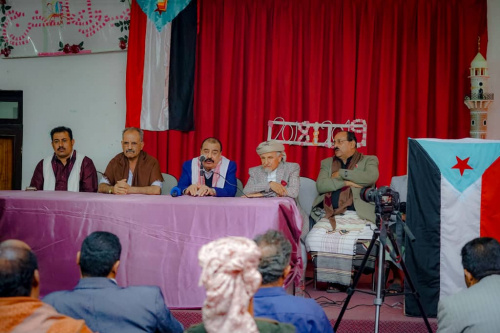 Major General Ahmed Saeed bin Braik, Chairman of the National Assembly of the Southern Transitional Council, stressed that the southerners need to be united and stand together to achieve the aspirations and hopes of the southern people, away from narrow personal interests.

Major General Bin Brik indicated that the Transitional Council is the political bearer of the southern cause, which has been able to highlight the southern issue at the regional and international levels, and reality has proven the truth and rightness of the Council’s vision in preserving the gains of the southerners.

Major General Bin Brik added, "We have been able, with ability and quality of the men to face many challenges in the past five months, whether on the ground or in the political and diplomatic arena."

He continued his speech by saying, "We are well aware of the problems that components of the movement have encountered, and of penetrating and breaking them as well, and we have been keen in the Council to avoid them by establishing documents indicating a clear roadmap, starting from the establishment of the presidency of the Council, the National Assembly, and the General Secretariat until the establishment of the Shura Council." In the same regard, one of the most important principles of the Council is that "whoever is not with us will agree with us at the end, and we will not lose any fight we are engaging in."

Bin Brik cleared that "whoever had a will, he will remain strong, and if we don't establish a real state based on strong law and stand against anyone who tampers with the wealth and capabilities of the South and exploits the citizens with services, then the South will not stand up."

Bin Brik reminded of the martyrs who sacrificed their lives defending the south and spent the most precious and valuable for that.

At the conclusion of his speech, Major General Bin Brik renewed his thanks to the sons of Yafea for their hospitality and warm reception, wishing them more progress and success in serving their region and their country the Great South.