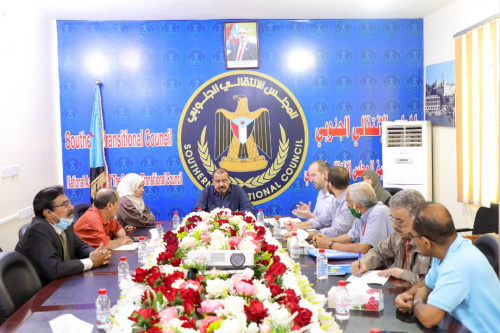 Major General Ahmed Saeed Bin Brik, Chairman of the National Assembly of the Southern Transitional Council, President of the Southern Self-Administration, met in his office on Monday, with Mr. Matthew Smith, Programs Director of Hello Trust organization to deal with mines and explosives, in presence of lawyer Niran Souki, member of the Presidency of the Transitional Council, Vice-Chairman of the National Assembly.

The meeting discussed ways to enhance the efforts and contributions of the organization in removing and dealing with mines and explosives of wars.

Major General Bin Brik praised the organization's efforts, stressing on the need for a greater role by the organization in removing what's left behind by backward wars against the south.

Major General Bin Brik explained that the south is exposed to an open war on three fronts by the Houthi militia in Al-Dhalea, and the Brotherhood groups in Shokra, in addition to the war against al-Qaeda and ISIS, and all of them left large quantities of mines and explosives, and cause massive damage to the lives of citizens, as well as to cattle livestock and destruction of agricultural lands.

The Chairman of the National Assembly expressed the readiness and keenness of the Transitional Council to ensure the success of the organization's activity and provide it with the necessary facilities, and securing its staff, calling on the organization to pay attention to the training and qualification process for the local staff to play its role in this direction.

For his part, Matthew Smith praised the cooperation of the Transitional Council leadership and its keenness to make the organization's work a success, noting that the organization seeks, through working with all parties, to reduce the risks of mines and explosive objects.