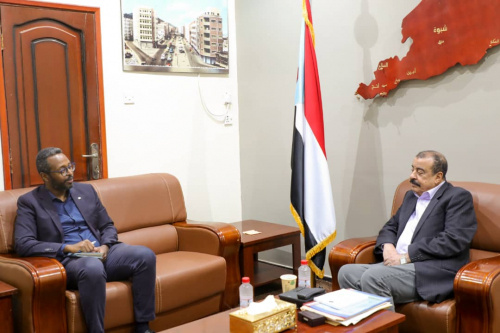 In the meeting, Major General Bin Brik praised the role and efforts of the Red Cross mission in the framework of its humanitarian activities, stressing on the great need for more of the organization's contribution in the health and humanitarian fields.

Major General Bin Brik called on the organization to condemn the recruitment and inclusion of children in the war in Abyan governorate by the Yemeni government dominant by the Islah party, noting that among the dead and prisoners are many minors.

Major General Bin Brik expressed the willingness of the self-administration to cooperate in facilitating the access and recovery of the bodies of the elements who belong to the Muslim Brotherhood from the front lines,.

Major General Bin Brik asserted that the self-administration will release all the southern prisoners of the fight that is taking place in the outskirts of Abyan governorate, with the exception of those who are proven to be involved in terrorist cases.

The meeting discussed the conditions of hospitals and health facilities in the capital Aden, and some governorates of the south, which are witnessing the spread of some fevers diseases, the most important of which is the new Coronavirus (Covid-19).  In this regard, the head of the Red Cross Mission confirmed the organization's readiness to contribute in the rehabilitation process of these hospitals through material support as well as awareness about the danger of this epidemic, noting that the organization recently completed a project to provide food aid that benefited about 18 people.

The meeting was attended by Brigadier Nasser Al-Saadi and Dr. Mona Bashrahil, members of the Presidency of the Transitional Council.