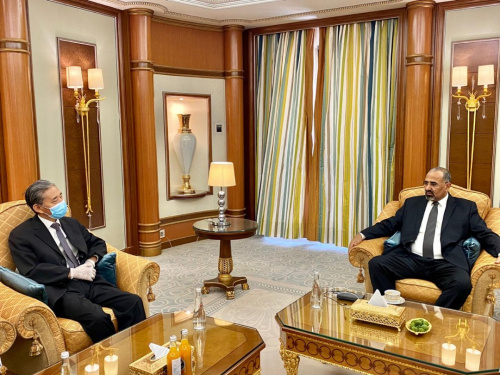 The President of the Southern Transitional Council, Supreme Commander of the Southern Armed Forces, President Aidaroos Qassem Al-Zubaidi,received, today, Thursday, at his residence in the Saudi capital, Riyadh, the Chinese Ambassador to Yemen, Mr. Kang Yong.

The meeting discussed various related files, especially the ones related to the humanitarian and economic files, in which President Al-Zubaidi emphasized on the great efforts made by the Kingdom of Saudi Arabia towards reaching to a solution, and indicating the need to find urgent solutions to the humanitarian situation, calling on China to send medical missions to help cope with the critical health situation.

For his part, the Chinese ambassador appreciated the historical relations between China and Aden, stressing on China's honor in this relationship, which as he said made a great positive impression on the Chinese people, pointing to the strategic location of the capital Aden, especially on the project of China's economic belt.