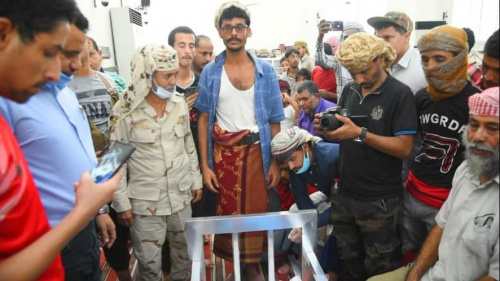 A funeral procession was carried out on Thursday, for the war international photographer, the martyr Nabil Hassan Al-Qaiti, who was martyred in a treacherous terrorist operation last Tuesday in the district of Dar Saad.

The masses of mourners were headed by Major General Salem Abdullah Al-Socotri - Assistant Secretary General to the Presidency of the Southern Transitional Council, Deputy Chairman of the Southern Self-Administration, and Ayman Mohammad Nasser - Undersecretary of the Ministry of Information, and Eng. Nazar Haitham - Spokesman for the Southern Transitional Council, and Dr. Abdullah Al-Haw - Head of the Media Department of the General Secretariat, and Mansour Saleh - Deputy head of the media department, and Abdel Fattah al-Shaari - Deputy head of the Foreign Affairs Committee of the National Assembly and a large number of civil, military and security leaders, in which they performed funeral prayers on the body of the martyr Al-Qaiti in Al-Rahman Mosque in Mansoura.

Amid feelings of sadness and anger, the mourners moved in a large procession with participation of thousands of southerners heading to the Radwan Cemetery in Al-Memdara, where the body of the martyr was buried.

After that, the masses of mourners, led by the leaders of the Transitional Council, offered condolences to the family of the martyr, and conveying to them the condolences and sympathy of President Aidaroos Qassem Al-Zubaidi, the President of the Southern Transitional Council, Supreme Commander of the Southern Armed Forces, and Hani bin Brik, Vice-President of the Council, and Major General Ahmed Saeed bin Brik, Chairman of the National Assembly, President of the Self-Administration of the South, and Secretary-General Ahmed Lamlas, asking Allah to get the martyr blessings, mercy and forgiveness, and inspire his family and relatives patience.

The participants in the funeral condemned the crime of assassinating Al-Qaiti, which reveals the terrorist trend rooted in the Brotherhood and which was embodied in its most horrific image in this terrorist operation.

The mourners demanded the speedy disclosure of the perpetrators of this crime and bringing them to justice to get their penalty for this crime.