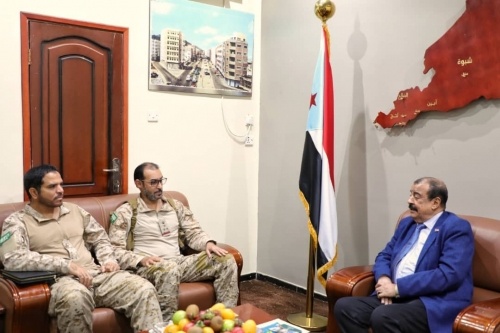 The Chairman of the National Assembly of the Southern Transitional Council, Major General Ahmed Saeed bin Brik, met on Saturday in Aden the capital with the commander of the Duty Forces 802, in the Arab Coalition, Brigadier General Mujahid Bandar Al-Otaibi, and the accompanying members, and in attendance of Major General Salem Abdullah Al-Sokatri, Assistant Secretary-General of the Presidency of the Southern Transitional Council, and lawyer Niran Sooki, Vice- Chairman of the National Assembly.

The Chairman of the National Assembly praised the efforts made by the Arab coalition forces in the capital, Aden and the south in particular, and Yemen in general in order to establish security and stability and restore the normal life throughout the country in general.

The meeting discussed many issues related to the security of the capital Aden and the fight against terrorism, as well as the support for the fronts, in which the meeting stressed on the need to unit efforts of all issues through the work of a joint operations room to control and control the disturbance.

The meeting also discussed the Corona pandemic and the health and therapeutic measures that should be taken to educate citizens about the seriousness of the virus, as Brigadier Al-Otaibi confirmed that the topic of the health quarantine center in Aden, which was identified in the Borika Directorate, will receive all attention and support by the government of the Custodian of the Two Holy Mosques through the King Salman Center for Humanitarian Relief and will be supported with all needed capabilities.

The meeting also touched on the paid Arab and internal media issue, which strives to sow discord between the coalition forces and the leaderships of the Southern Transitional Council, by spreading rumors and lies through media channels.

The Chairman of the National Assembly emphasized that the leadership of the Transitional Council works to establish security and stability in the capital Aden, particularly in the Crater district, and to make it a model for the rest of the southern directorates and governorates, and support to address all terrorist acts and everything that could destabilize security and stability within the capital Aden.

Maj. Gen. Ben Brik pointed out that the Transitional Council works with the available capabilities in order to alleviate the suffering of the people and overcome the difficulties facing them so they can live a decent life, as well as secure their healthy lives through the work of a quarantine for any case that appears to be infected with the Corona virus, in light of the available capabilities.

At the end of the meeting, the commander of the Arab coalition forces in the capital, Aden, praised all the efforts made by the leadership of the Transitional Council, to establish security and stability in the capital Aden.

Brigadier Al-Otaibi confirmed that the Arab coalition forces will work hand in hand with the leadership of the Transitional Council, to make the capital Aden a model to be followed in all aspects of security, military, health, or humanitarian