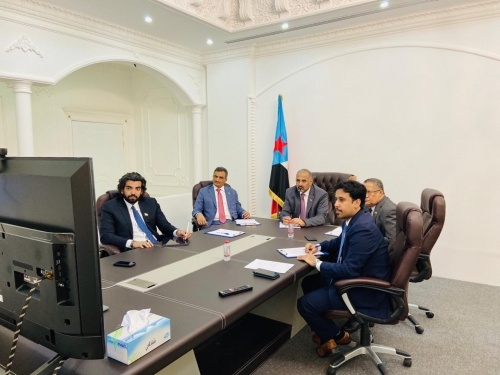 The President of the Southern Transitional Council, President Aidaroos Qassem Al-Zubaidi held, on Saturday, an important meeting with the Special Envoy of the Secretary-General of the United Nations, Mr. Martin Griffiths, in which they discussed peace efforts to resolve the crisis in Yemen, and the efforts to confront the Corona virus pandemic and the humanitarian situation.

In the meeting, the Transitional Council agreed with the office of the envoy of the Secretary-General to continue contacts and discussions and to hold a second direct meeting during the coming weeks, to discuss all developments, ways of calm and cooperation towards available solutions.

The meeting was attended from the Transitional Council side by Mr. Ahmed Hamed Lamlas, the Secretary-General of the Presidency of the Southern Transitional Council, Dr. Nasser Al-Khubaji, Head of the Negotiations Affairs Unit, Mr. Amr Al-Beedh, member of the Presidency of the Council, and Mr. Mohammad Al-Ghaithi, Deputy Head of the General Directorate of Foreign Affairs of the Council.

For the Secretary-General's envoy side, the meeting was attended by , Mr. Moeen Shreim, Deputy of the Envoy, and the envoy's advisers, Mr. Marwan Al-Ali, Mr. Peter Rice, Mr. Masaki Watanabi.