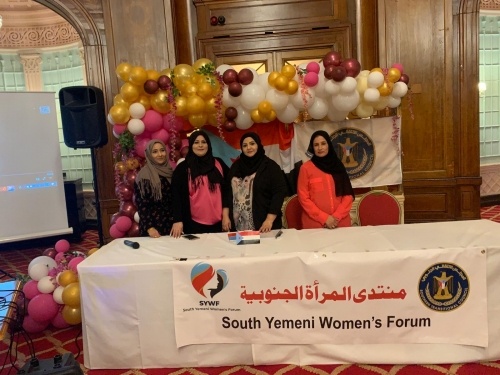 The Southern Women Forum in Britain held on Saturday, in the British city of Liverpool, a women's event on the occasion of International Women's Day, under the auspices of the General Directorate of Foreign Affairs Office in the Southern Transitional Council in the United Kingdom.

The event started with the southern national anthem, and then the Director of the Southern Women Forum in Liverpool, Yasmine Al-Wali, delivered a speech during which she talked about the role of women in in various social and political areas and assuming their responsibilities in all fields.

Yasmine Al-Wali stressed on the Transitional Council’s keenness to pay attention to women in all aspects of social, economic, and political life, and support her to get all her rights, and to participate with the man in building the society, and her future southern state that preserves all rights and freedoms for all segments of Southern society.

Al-Wali indicated that establishing the Southern Women Forum in Britain came to support the effective role of women, for what will be provided to the southern feminist cadre in representing her people's cause and giving the southern woman the status she deserves and the necessary qualification in all aspects of life, especially political and decision-making within home and abroad.

Southern activist Iman Amer also delivered a speech in which she talked about the reasons of celebrating Women's Day, and the importance of the woman role in society, with her ability to change the society for better, and supporting our sons to create a generation capable of building the modern southern state.

The event included presenting featured documentary films about the South, and distributing certificates of honor to a number of women cadres who served the South at home and abroad.