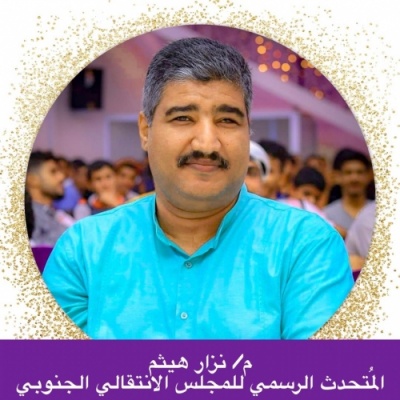 The Southern Transitional Council sees that what came in the press conference of the Secretary-General of the Nasserist Unionist People's Organization, Abdullah Noman al-Qadasi, on Thursday, good and welcome signals regarding the south, and it meets the directions of the Southern Transitional Council, and its keenness to establish peace and the success of the Arab project in the face of the Iranian expansion project. We, at the Southern Transitional Council, look forward to the Yemeni parties to pick up the invitation of the Secretary-General of the Nasserist Organization, and all seek to unify their efforts to the north towards the main battle against Houthi militias, and to condemn all conspiracies and crowds that target the south as - the south - until the moment is the main partner in these battles, and it is wrong to antagonize the south and take it as an enemy. We remind the Yemeni political forces that the south today bears the greatest burden in this battle, whether in military, on various fronts that cause the south daily martyrs and wounded, or in economy and security, through refugees and displaced people estimated in millions from various northern governorates heading to the south, and the resulting obligations for them that come at the expense of the livelihood of the southern citizens, this necessitates these forces to stand with the south, and not vice versa, as is now the case, because that would harm everyone. The Southern Transitional Council reaffirms its openness to all political forces opposed to the Iran and Houthi project in Yemen, while adhering to and maintaining the southern specificity and the goals of our revolution that cannot be undone, and we see that this front - the resistance front - is the most important and has proven effective in countering the Houthi project so far, and starting from there to achieve the objectives of the Arab project away from the legitimacy infiltrated by the parties and personalities that have become addicted to failure. Eng\ Nizar Haitham Official spokesman for the Southern Transitional Council