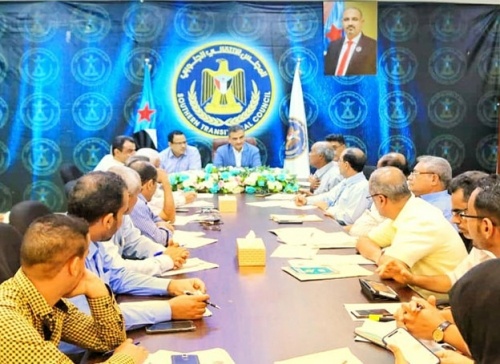 The General Secretariat of the Presidency of the Southern Transitional Council held on Monday, its weekly periodic meeting at its headquarter in Aden the capital.

The meeting listen to report submitted by the Economic Department on the economic scene for the current and past periods, in addition to a number of proposals in this regard.

The meeting previewed the latest developments on the southern scene in general and the current political scene in particular, in which the participants presented their opinions and proposals to the difficulties facing the work of local bodies in the governorates and obstacles facing the operation of departments and ways to improve level of their performance.

The Secretary-General praised the departments' endeavor to implement their plans, stressing at the same time on the necessity of achieving the highest levels of achievement in their submitted work plans.

For his part, Major General Al-Soqatri discussed a number of topics related to the current situation of the educational process, and the process of continuous displacement from the northern governorates towards the south for the purpose of searching for safety in the capital Aden and the governorates of the south, stressing that the capital Aden is safe and will remain so, and it's a shelter for everyone looking for peace and security.

Major General Al-Soqatri stressed on the importance of the continuation of the educational process and the completion of the students ’academic year without any obstruction or obstacles, emphasizing on the legality of teachers’ demands and their right to provide decent livelihoods for them and their families.

In conclusion, the meeting stood before the mandates issued to the General Secretariat by the Presidency of the Transitional Council, in addition to the rest of topics on the meeting agenda and the necessary measures to be taken in this regard.