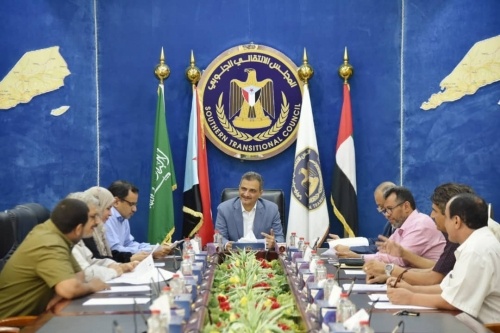 The meeting discussed the developments of the security, military and political situation on the southern scene, including the provocative acts that the military brigades of the Yemeni legitimacy controlled by the Muslim Brotherhood in Socotra, Shabwa and Abyan.

The meeting previewed the attempts of the Houthi militia to open two new fronts in each of Yafea and Al-Meseemir in Lahj governorate, considering the Houthi attempts to coincide with the provocative operations of the Brotherhood forces in Shabwa and Abyan, and re-activating the terrorist cells in the central regions of Abyan governorate, as conclusive evidence of the operation coordination between all those parties, which are united for the goal of reoccupying the south, and bringing it into chaos.

In the context, the Presidency of the Southern Transitional Council renewed its call for the Arab Coalition, led by the Kingdom of Saudi Arabia, to put an end to the provocations of the other party in the Riyadh Agreement, and to press for accelerating the implementation of the agreement.

The meeting also discussed the recent developments in Aden the capital, and attempts to disturb the relationship between the southern people and the brothers in the Kingdom of Saudi Arabia.

The Presidency confirmed its condemnation of the systematic campaign launched against the Kingdom of Saudi Arabia in order to distort its active role in the south.

The meeting stood before the report submitted by the Negotiation Affairs Unit team for the last period and the results of the team's meetings with a number of ambassadors and officials of major countries.

In conclusion, the meeting listened to reports on the performance of each of the National Assembly and the General Secretariat of the Presidency during the past period and taking the necessary measures regarding them.