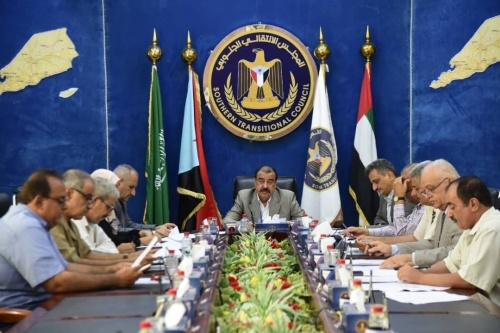 The meeting discussed the latest developments on the southern scene according to the analytical report of the month of October, submitted by the Center for Decision-Making Support, and the social activity of the Presidency and the General Secretariat.

The Presidency appreciated the heroic and courageous stand of the security belt forces and tribesmen in the districts of Ahwar, Al-Muhafad, Lauder, and Mudiyah in Abyan province, who defended their land against the provocative military escalation of terrorist groups hidden under the army shadow to hinder the efforts of the Kingdom of Saudi Arabia to complete the signing of the Riyadh Agreement.

The Presidency of the Council expressed its support for all the measures taken by the leadership of the Arab Coalition in Aden the capital, and appreciated the UAE's tender and unlimited support to the capital Aden and the south in general.

The meeting called on the Arab coalition to secure the announcement of the Riyadh agreement on its scheduled date next Tuesday, and to start implementing its terms, and to be firm towards any party that puts obstacles to its implementation.

The meeting also touched on the peaceful movement of the Socotra archipelago in the face of corruption and terror of the governorate leadership loyal to the Muslim Brotherhood, praising the calm efforts led by the member of the Presidency of the Transitional Council Major General Ahmed Abdullah Al-Soctari, Transitional council local leadership in the province and social figures and with them the leadership of the Arab Coalition represented by Saudi Arabia, and all the citizens of the archipelago.

The meeting condemned the torture policy of the Yemeni government, which imposes a continuous siege on the people of the capital Aden, through deliberately disrupting services in the city, especially the electricity that is up to stop because the government refuses to provide oil derivatives to power plants, and the refusal to renew the contract with the purchased power plants, and deliberate looting of electricity budgets of maintenance, and the suspension of the salaries of security and military personnels, which is added to the crime of suspending treatment funds for wounded heroes of the army and southern security on the front lines.