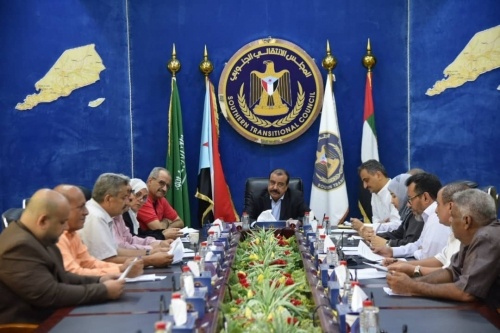 Ben Brik started the meeting with a brief review of the meetings held last week, including the meeting with Major General Fadhl Hassan Al-Omri, Commander of the fourth military region, in order to find out the reasons for obstructing payment of salaries of security and military personnel.

Major-General Ben Brik also reviewed the results of his meeting with the ICRC delegation in Aden the capital, and the mechanisms agreed to enhance joint cooperation between the Southern Transitional Council and the International Committee of the Red Cross.

The Presidency also discussed the activities of the General Secretariat of the Presidency over the past week, including the results of the Secretary-General's meetings with the members of the Office of the UN Special Envoy to Yemen, Mr. Martin Griffiths, which focused on the developments in the capital Aden and the south in general, as well as consultations held by Southern Transitional Council delegation in Jeddah of Saudi Arabia.

The meeting listened to the evaluation report of the Decision Support Center on the past and recent events and their impact on the ground, as well as the media role of the Transitional Council's bodies with the positive and negative aspects.

The meeting previewed a number of topics on its agenda on the updates of the security and military situation in various governorates, in which a team from the National Assembly assigned to review the situation in the province of Abyan.