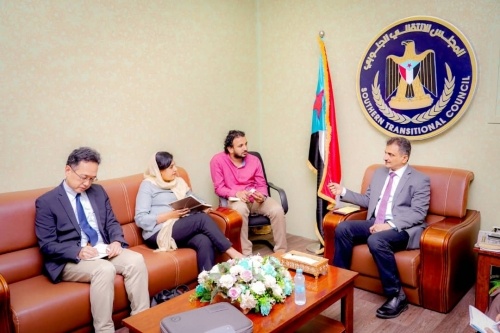 The Secretary General of the Presidency of the Southern Transitional Council, Mr. Ahmed Hamed Lamlas, and in the presence of the Assistant Secretary General, Mr. Fadhl Mohammed Al-Jadi, met on Thursday Ms. Suki, Representative of the Humanitarian Affairs Coordination of the United Nations Office in Yemen, and Mr. Masaki Watanabe, Deputy Director of Political Affairs of the Office of the UN Special Envoy Mr. Martin Griffiths, in Aden the capital.

In the meeting, the Secretary-General welcomed Mrs. Suki and her accompanying delegation, expressing his delight for holding this meeting, praising their attention to the humanitarian aspects, and the suffering of the southern people under the current circumstances.

Lamlas pointed out that during the past four years, various relief organizations have been and are still confined to the relief and assistance of only the displaced, while others for example in Aden the capital deserve humanitarian assistance too.

The Secretary-General stressed that the deterioration in the humanitarian situation in the southern governorates, especially in the areas of services, is due to the ignorance of the corrupt legitimacy government of its duties towards citizens, especially its refusal to provide fuel for power plants, and the payment of salaries of the security and military institutions, as well as shutting down the work of the Immigration and Passport Department, and dialysis centers, and other facilities, which doubled the suffering of the citizens.

At the end of the meeting, the Secretary-General handed over the representative of the Humanitarian Affairs  Coordinator a file on the violations of the government and the deterioration of services and their negative impact on the lives of citizens, which was monitored and prepared by the Human Rights Department of the General Secretariat of the Transitional Council.