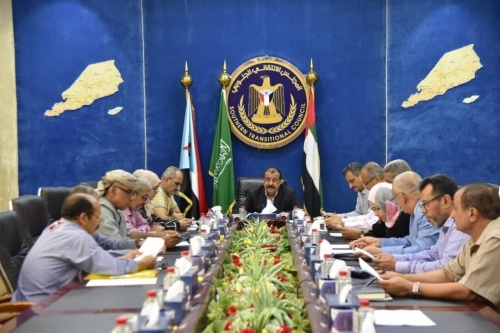 The meeting reviewed the results of the consultations held in Saudi Arabia by the delegation of the transitional council to the Jeddah dialogue with Saudi officials, praising the positive aspects of these consultations regarding recent events, expressing the readiness of the officials of Saudi Arabia to resolve the matters to achieve security and stability in the liberated areas, and to combat terrorism and extremism, and direct all efforts to confront the Houthi militias.

The meeting discussed the latest developments on the southern scene, especially the military developments in the northern fronts of al-Dhali and Thera north of Abyan.

The meeting denounced the violations committed by the so-called legitimacy and terrorist groups under its cover, against unarmed citizens in Shabwa, Abyan and Hadramaut valley, as well as the ongoing mobilization by these forces towards Abyan province and brining various weapons from their strongholds in Marib, al-Jawf, and al-Bayda towards the southern governorates, in defiance of the Saudi-Emirati Joint Statement.

The meeting also reviewed the security situation in Aden the capital, praising the efforts of security forces to restore security and stability of Aden and the rest provinces.

The meeting dealt with the status of services in the capital Aden, especially the electricity service, after the so-called legitimate government renounced its duties towards citizens, and attempted to use the services paper for political gains.

The meeting stressed on the need to work to provide basic services to the citizens as a moral and national duty towards our people, in accordance with the possibilities available.