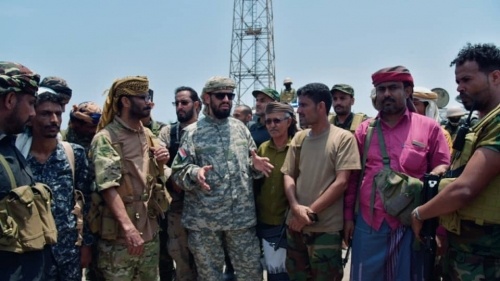 The Vice President of the Southern Transitional Council, Hani Ali bin Brik, visited on Sunday, a number of districts in Abyan province.

Ben Brik inspected the Southern Armed Forces heroes stationed at the entrances and exits of the province cities, as well as the deployed troops to preserve public tranquility and protect public facilities and private properties of looting.

The Vice-President of the Transitional Council, praised the military achievements of the citizens of Abyan by expelling the invading forces and clearing their province of the Muslim Brotherhood terrorist militias and the elements of al-Qaeda and ISIS, who came to the province under the cover of legitimacy.

Ben Brik stressed on the need to exercise vigilance and enhance the sense of awareness to prevent attempts to destabilize the security and stability of the province, and stand firmly against the terrorist groups who aim of returning to Abyan again.