President Al-Zubaidi delivers an important speech to the southern people

President Al-Zubaidi delivers an important speech to the southern people 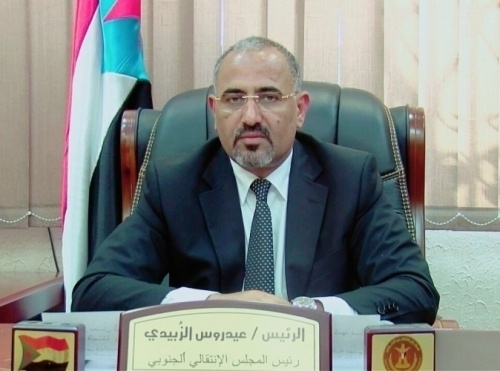 Peace, mercy and blessings of Allah upon you,

First of all, we would like to congratulate you on the occasion of Eid al-Adha,

this occasion that came to us this year with the blessing of securing Aden the capital from camps that used to harbor terrorist elements and contain explosives and booby-traps factories, and not forgetting the tasks of liberating the remaining regions of the South in Hadramout valley, Beihan, and Mukiras, which still continue to suffer from terrorism.

We also congratulate the Arab and Islamic nations on this occasion, asking Allah to get it returned back to us with the achievement of the aspirations of our nations.

We take this opportunity to pay great tribute to the Arab Coalition forces led by the Kingdom of Saudi Arabia and the leadership of the King - the firmness and determination - King Salman bin Abdulaziz Al Saud, the Custodian of the Two Holy Mosques.

We also applaud the courage, valor and steadfastness of the heroes of our southern forces on the fighting fronts against the Iranian Houthi expansion and against terrorism,

pray for mercy for the martyrs souls, who sacrificed their lives for their homeland, and we wish the wounded a speedy recovery.

The unfortunate events of August imposed on us and our role was first just to react, after that our role became the self-defense, while the role of the other party was to implement a plan based on the assassination of our leaders, and then to provoke our people and liquidate our presence.

On the 1st of August, three simultaneous terrorist operations were planned and prepared with precision in each of Sheikh Othman police station, Al-Galaa military camp in Aden, and Al-Mehfid district in Abyan, that led to killing 60 martyrs, among them the commander of the First Support Brigade the martyr Brigadier Munir Mahmood, Abu Yamamah, and 100 wounded, and the destruction of a number of facilities of public institutions, houses, and infrastructure.

On the 7th of August, during the funeral of the martyrs in the Qatee cemetery, and without taking into account the sanctity of the place and the occasion, the mourners were shot at while they were in moments of sadness and sorrow, thank Allah that this incident was filmed to prove the truth of our claim.
The purpose of this treacherous act, which left three people dead and a number of wounded, was clearly provocation.

This is exactly what happened as several peaceful demonstrations were launched condemning all what happened, and were suppressed with iron and fire, which increased the number of casualties.

On August 8, everything was revealed when heavy weapons, including tanks and artillery, appeared from the presidential protection brigades camps, specifically from Bader military camp.

In which they attacked the 1st Infantry Brigade Camp in Jabal Hadid with two brigades, 39th  Armored and 3rd Presidential Protection Brigades.

The attack was preceded by intense shelling that led to great casualties in the 1st Infantry Brigade camp in Jabal Hadid, as well as the destruction of the water pumping facility of the citizens in Aden.

We and the international and regional organizations in Aden were surprised by the emergence of dormant cells of marginalized and African migrants.

It was found out that they were recruited by the presidential brigades and were officially given military ID numbers to get salaries, and get them armed, and take part in battles on their orders, which indicates their advance planning for this failed work that got reflected on them, without mentioning the amount of weapons and ammunition found in the presidential protection brigades that are sufficient to fight the Iranian Houthi enemy on all fronts without coalition support for at least 12 months.

After we have shown you the truth of what happened, the international and regional organizations in Aden can be an eyewitness to these facts, we would like to stress on the following points:

1.Our readiness to work responsibly with the leadership of the Arab Coalition, led by the Kingdom of Saudi Arabia, in managing this crisis and its consequences in order to enhance the cohesion of the social fabric.

2.We reiterate our firm position to stand fully with the Arab Coalition to fight Iranian expansion in the region under the leadership of the Kingdom of Saudi Arabia.

3.We renew our confidence in the Kingdom of Saudi Arabia, from which we hope and attach the expectations and aspirations of our people, and we declare our readiness to work with them and through them as a strong loyal ally that has already proved on the ground for five years what others failed to do except through their lies.

4. Our readiness to attend the meeting called by the Kingdom of Saudi Arabia with full openness with our confidence in the leadership of the Custodian of the Two Holy Mosques King Salman bin Abdulaziz (may Allah protect him)

In conclusion, we wish you all a blessed Eid Al-Adha,