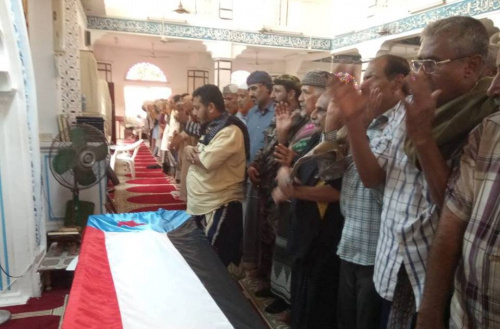 The President of The Southern Transitional Council – Major General\ Eidaroos Al-Zubaidi, Tuesday at noon, at the historic mosque of Aban, in Crater city held the funeral prayers for the deceased of the homeland, Dr. Saleh Yehya Saeed, in presence of a number of the STC presidency members, leaders of the Southern Resistance, and thousands of the people of Aden the capital.

After the prayer on his body, which wrapped in the flag of the South, thousands of mourners marched in procession towards the cemetery of Al-Katee in Crater, where his body was buried.

The President of the Southern Transitional Council (STC) – Major General\ Eidaroos Al-Zubaidi, and the members of the STC presidency, presented their condolences to the family of the deceased, first of them his son Nadhim, praying the Almighty Allah to accept him in mercy, and inspire his family patience and solace.