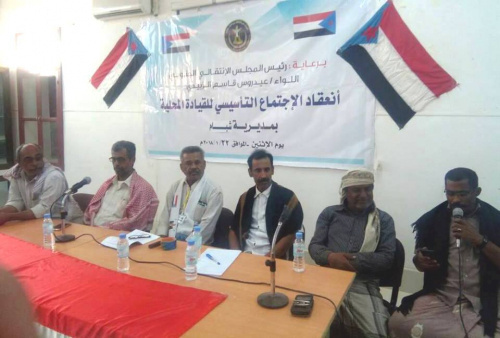 At the meeting, which started with verses from the Holy Quran; The Head of the Local Leadership of  STC in Shibam district - Ahmed Salem Kharaz,, delivered a speech welcoming the members of the supervising committee for the progress of the meeting from the executive board of STC in Hadramout; Mohammed Batis – Head of Organization Department, Ali Hamadoon – Head of Martyrs and Injuries Department, and Mohammed Mohsen Al-Kathiri – Member of Executive Committee of Hadramout governorate. He also welcomed all guests from the local leadership of the governorate and the district.

In his speech, Kharaz expressed his support for the outcomes of the Aden meeting, chaired by President Eidaroos Al-Zubaidi, President of the Southern Transitional Council (STC), stressing that STC is the result of the sacrifices and struggle of the southern people to achieve freedom and independence and reinstate the full sovereignty State of The South.

Mohammed Mohsen Al-Kathiri - member of the executive board of the governorate, also delivered a speech on behalf the supervising committee, in which he welcomed the Director of Security of Shibam district, and the Planning Director of the Local Council of the district, and the southern poet Ramadhan Baakim - member of the local leadership in the governorate, and all the attendants, conveying to them the greetings of President of the Southern Transitional Council, Supreme Commander of The Southern Resistance Forces – Major General\ Eidaroos Al-Zubaidi, and Mr. Naseeb Ahmed Alamiry – Head of STC in Hadramout, he pointed out in his speech that the meeting today in the historic city of Shibam comes within the program of completing the organizational work of the Southern Transitional Council (STC), through the announcement of local leaders and the formation of executive bodies in all governorates and districts of the Arab South, from Al-Mahra east to Bab Al-Mandab west ... calling all for the unity of decision and stand as one to achieve the goals of freedom, independence, and instating the federal Arab State of South of full sovereignty, he also stressed on the importance of speeding up in spreading of Hadramout Elite Forces to take control on the valley and desert of Hadramout as in the coast of Hadramout.  Then, the names of the local leadership of the Southern Transitional Council (STC) for the district of Shibam declared.

Afterwards, declared the decision of the head of the local leadership of STC in Shibam district regarding the assignment and naming the executive board heads of departments of the STC local leadership in the district.