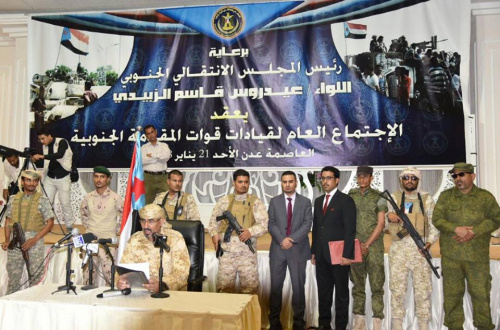 In the name of Allah the most Merciful,

It's a great honor to meet you all today at this important meeting. As I told the representatives of the people on the day of the National Assembly, I say it here once again today, it's great honor for us to bear the responsibility together, and in how worthy of the sacrifices of our righteous martyrs, with loyalty to their blood, and loyalty to our great southern people and their heroic struggle, in the loyalty to our legitimate right for independence and reinstating our free independent southern state with its capital Aden.

The great people of South, our brave heroes..

From our historical responsibility for our national cause, and for our brave and patient people, for their solemn sacrifices for the homeland.. from our deep awareness of our role, responsibility, and duties towards and Arab Alliance, under the leadership of Saudi and United Arab Emirates, to defeat the Iranian project in Yemen, and for the victory of the Arab nation causes and protecting its national security, We were and still we are as southerners active part of all of this.. The previous stages have proved that we in the south are the support and not burden to the Arab Alliance, we the southerners have been helpful, and we have not been shaky at any stage of clashes, there is no record as social, political, or military force to be counted negatively against us at any course in war or politics, we, the southerners, have been indisputably the best ally of the storm firmness and hope since its launch until today.

On the other hand … we were looking forward to build a genuine partnership with the legitimacy based on mutual respect for the meaning of partnership and its political base that admits our existence and the presence of our cause, and respect the will and sacrifices of the people of the south, not to disparage or fight them, but the decisions of the legitimate government  have been seized by political and utilitarian forces that have violated all of the above, and made the southern community in general and the southern transitional council in particular a target for confrontation, and declared the war on them by all legitimate and illegitimate means, and its decisions were clearly aimed at all the southern leaders, in identical and repeated way in the past decades against the land and people of the south. The Yemeni government has afforded all its potential and capabilities to confront the south, its people and its national project, as if its main task is to destroy the south and fight its people, targeting the people of the south is against the goals of the Arab Alliance and in this way it supports the Iranian project and the Qatari government project and the Turkish too in the area, the government forgets the duties and tasks that any government in the world should do in the normal circumstances, not to mention the exceptional circumstances that we are currently living.

This systematic and aggressive act has made the south and main enemy of the government of failure and corruption instead of the Houthies and their project, this act has produced deteriorating economic, security, and social situation has never been witnessed in the history of south before, the society has fallen to unprecedented levels of poverty, famine, disease, and epidemics, and has produced frightening deterioration in public services and living up to the level of crime.. it is a situation that can never serve the strategic objectives or the storm of firmness of the Arab Alliance, especially with the resulting anger within the people in southern public society.

The Yemeni legitimate government launched major media war against the people of the south targeting their options represented in the Southern Transitional Council with its role, and its leadership , then moved to doubting the role and existence of the Arab Alliance and its objectives in the south, particularly UAE, in order to create a state of suspicion among the people to divert their attention from its great failure and responsibility in reaching this dangerous and deteriorating situation, it controls all of that in several ways administrated systematically according to hostile plans.

We are for all of that mentioned.. and as we exhausted all the ways and means that we tried through to create partnership atmosphere in the general work away from the political positions, and as every southern citizen has been affected.. and as more silence will lead us with our people and cause to a real death, allow me to invite you to agree on the following:

First: our full commitment to the Arab Alliance to go side by side with them until achieving the strategic objectives of the storm of firmness and hope, and eliminate all that threatens Arab national security upon our available capabilities.

Second: Allow me to ask you, from a national and responsible point of view, to take a firm stand towards the futility of the legitimate, in a way to end the suffering of our people in the south, protecting their gains and safeguarding their national sacrifices. We stress that we will be together in the front lines to implement what is agreed on in this meeting.

Third: The clear rejection to launch the Yemeni parliament session in Aden the capital or any other region in the South, assuring this cannot be done in order to preserve our political future, and respecting to our cause that we have sacrificed for with expensive blood.

Forth: Our people fought bravely for their national goal in liberating the south and reinstating their free independent state, believing in the political and military objectives of the storm of firmness, and will never abandon the belief and commitment to these strategic goals. Based on the people mandate and the historic declaration of Aden, and our security interests, we emphasized that any existence of any northern armed military forces is against this objective, and it will be provocation to the feeling of our great people and the sacrifices of the wounded and martyrs. Therefore, we reject the presence of any northern military forces in the south, and this is clear principle for us, understanding the common interests related to the Arab Alliance in achieving its military objectives in the north, and the necessity to build northern resistance forces to fight the Houthis in the north.

Fifth: We fully affirm our full support to the northern resistance forces that are supported by the Arab Alliance in everything helps in eliminating the Iranian – Houthi project, and we will be the support to safe lives of the innocent and defend our people and the Arab project and protect our homeland and achieve the goals of the Arab Alliance, we will be with them until full victory over the Iranian Persian project.

Seventh: We value the great confidence of the people of the south in us, and we assure them that we will not relinquish our goals announced in Aden historical declaration which mandated us to form the Southern Transitional Council, we ask our people to remain steadfast in these critical political circumstances and protect our national unity.. Our people, be fully confident that we are on what we have pledged with you regardless the sacrifices, and this is the truth of the truthful and the covenant of men for men.

Eighth: The Southern Resistance has shown honorable stances in the battle of defending the south, and for the victory of our main cause, defending the people of the South and their free will when required, today we continue our march on firmed bases and soiled foundations that are not shaken by any circumstances, for freedom and independence, and protection of our southern people and their gains.

You heroes, we are aware of the importance and seriousness of the this stage, we realize our responsibility, and we will bear it as fullest.. wishing the success for all, the mercy and forgiveness for our martyrs who will stay in our memory, hearts, and our history, speedy recovery of the wounds of our heroes, freedom of our prisoners whom we will never forget.