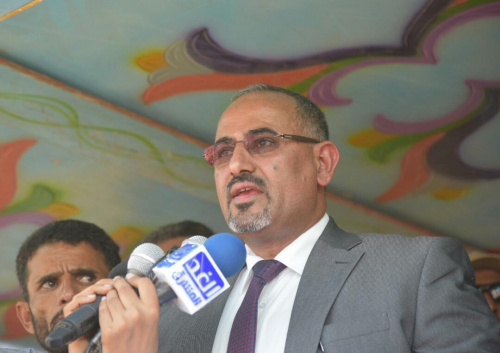 At the celebrations ceremony president of the Southern Transitional Council Aidros Al Zubaidi said , ‘We the STC are here today in Zengibar to inaugurate the National Assembly and the Local STC headquarters in Abyan governorate. We are conveying our utmost pleasure and honor to be with you here in Abyan , a governorate which represents a strategic depth and continuous mounting struggle for freedom and independence’ .

Pointing that Abyan has donated to the south much more than it had received. Abyan continued to bear the pain and confront all those who try to break it or to delude its people out of what we all expect from its brave men and women, who have produced national figures who serve the country in all fields  .

In his speech to the people Al Zubaidi said that Abyan has shown mythical dedication throughout the stages and it is the one which defeats all the enemies’ conspiracies and plots which serve to weaken the great southern giant which emerged in 2007 . Abyan was at the front of the initiative of tolerance and reconciliation. Abyan’s people showed great examples of belonging and consistent in their principles in which martyrs gave their lives for, this is not new for the people of Abyan , for it is known for its love for a better future ,a future of stability , reconstruction and development in a free independent southern state, although there were repeated attempts to hijack it and terrorist forces schemes to discredit and defeat it.

Al Zubaidi pointed that the terrorist forces wanted to be a thorn in the side of the south , but Abyan proved that it can overcome those attempts , its victory was a heroic epic victory in the shape of the will of people of Abyan who inherent an affiliation to the southern national project . In this context, we applaud the efforts of commander Abdul latiff Al Saed and Commander Munir Abu Yamama and the heroic role played by the security belt forces in the fight against terrorist organizations and establish security and stability in our beloved province of Abyan.

Confirming that him and all the southerners are proud of those who showed a model of resilience , courage ,patience , sacrifice and fortitude with legendary energy that expresses the core element of the faithful heroes who are loyal to our just cause. Reassuring the Southern Transitional Councils’ stand by the people of Abyan at  the front lines against terror and those who are running schemes to prevent Abyan from restoring its glory and its historic role in achieving political and military victories.

He said, ‘We have launched the Southern Transitional Council national assembly’s in a number of provinces of the South, most recently, Shabwa , Hadhramout, Al Mahara and Lahj, there was total cohesion and support for the Transitional Council ,which was chosen by the people of the South to be the political national bearer of the southern issue and to be its national and international representative at the various local, regional and international forums.

Al Zubaidi assured that the STC is building its foundations firmly with complete confidence from the valiant people of the South, where Sanaa failed with its joint forces and its militias to defeat and extinguish this revolution for years in more difficult and more dangerous and deteriorating conditions than today.

He Added, ‘ The battle today is with the system in Sanaa and its parties which have been as an occupation since 1994 and promoted the invasion of 2015.  It is , a struggle for victory and for the national southern  cause, a struggle to live in freedom and dignity or die with honor and pride, a struggle for security and development in one hand and against terrorism and its funders and supporters, on the other hand.  Allah willing, we will win thanks to the resilience and the mythical will set by the people of the south’.

He pointed out that today a political and economic embargo is placed against the southern governorates and the capital Aden as well as the deteriorating economic and living conditions and poor public services ,are part of the attempts to subdue the will of the people , but inevitably all these attempts will end thanks to your unity and your response to the popular escalation for ending the tamper and for removing the blurry negative overlaps that gloom the southern scene today.

Al Zubaidi stressed that all what is happening today in the provinces of the South, are planned attempt by parties, supported by the legitimate government , didn’t realize that the southern victory over the coup forces is a victory which fulfills the will of the Southern people.

The southern transitional council is the council of all the south, and will not exclude anyone, or marginalize any political component which has similar goals as the STC, which is the will of the southern people in creating its independent sovereign southern state . The priorities are to free the rest of the provinces which are under the Saleh /Houthi militias occupation in Mukairas , Bayhan and its reserve forces in Wadi Hadhramout .

The military operations will continue against Daesh and Al qaeda untill the area is totally cleared of  their existence specially in the southern provinces and that the war against terrorism is not just a security issue but needs political , information and social efforts to overcome it , therefore the Council will, within its programs, will participate  on rehabilitation and training a large segment of the society in various fields to contribute to creating a healthy environment for the process of political and security and community construction in Abyan in particular and the south in general .

The STC’s  thanks the brothers in KSA and U.A.E. and all countries of the Arab coalition for supporting the  people in the southern liberated provinces where it defeated the militias and cut off the Iranian expansionist project and the invasive terrorist in the South.

Maj. Gen. Ben Berek said that Abyan governorate has produced a vast number of leaders  and southern national heroes whom we are all proud of they have their clear prints on the southern history, from here Abyan we assure everyone internally and externally that the STC will continue its revolutionary path till we reach the Great Victory in restoring our free independent  southern state.

In return First Brigade Commander, support Brigadier Munir Al Yafai, Abu Al Yamama ,said Abyan triumphed over terrorism and terrorists with all its men jointly with men of the South saying that  it's time to stop messing around in Aden assuring that it will be stopped.