DMSC Holds Periodic Meeting for Second Half of January

DMSC Holds Periodic Meeting for Second Half of January 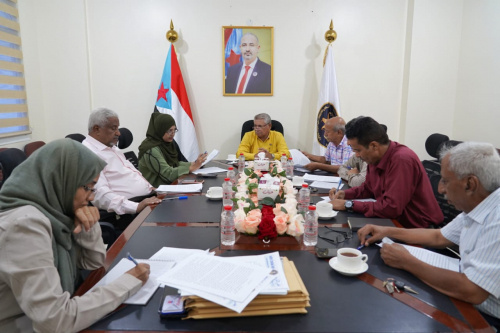 The Decision-Making Support Center (DMSC) in the Southern Transitional Council (STC) held its periodic meeting for the second half of January 2023 on Thursday, chaired by Dr. Khaled Ba-Madhaf, head of the center.

The meeting valued the active political and diplomatic movement of President Aidaroos Qassem Al-Zubaidi, the President of the STC and Vice-Chairman of the Presidential Leadership Council (PLC), and his extensive meetings with Arab ambassadors and major countries, stressing the importance of strengthening the role of the STC's leadership in the current stage.

The meeting touched on the importance of the First Conference of Southern Journalists and Media Members (FCSJMM), its outcomes to launch a new phase of institutionalized media, and the aspiration to create a political media that assumes its national responsibility to the cause of the people of the South with its legal and historical dimensions.

The DMSC's meeting called for strengthening the tightening measures and promoting the popular action in the Abyan governorate as a supportive approach to counter-terrorism.

The meeting, too, discussed the draft of a monitoring report for the past period in preparation to submit it to the leadership of the STC in the form of recommendations.