President Al-Zubaidi Pays Reassure Visit to Commander of 8th Brigade, and wounded in "Arrows of the East"

President Al-Zubaidi Pays Reassure Visit to Commander of 8th Brigade, and wounded in "Arrows of the East" 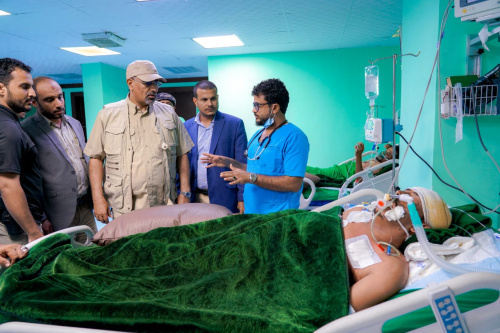 During his visits, the President reassured on the health condition of the commander of Brigadier General Al-Khadr Hamsan, commander of the 8th Commandos Brigade, who was injured while performing his national duty in chasing terrorist elements in Omran Valley, east of Abyan Governorate, giving directions to promptly transfer him abroad to complete treatment as soon as his health condition becomes stable.

Within the framework of his paid visit, the Commander-in-Chief Al-Zubaidi was briefed on the health conditions of the other wounded soldiers in "Arrows of the East" military operation, and the level of health care provided to them, stressing that the medical teams should pay utmost care and intensive attention to them until they recover.

President Al-Zubaidi, too, expressed his pride in the immense sacrifices made by the affiliates of heroic Southern Armed Forces in order to combat terrorist groups and consolidate security and stability throughout the South, affirming that these ultimate sacrifices will be immortalized in history with threads of light.

In turn, the wounded expressed their sincere thanks and appreciation to President Al-Zubaidi for honouring them in this paid tour, praising his constant keenness to follow up on their health conditions, affirming their readiness to make the supreme sacrifices until the land of the South is cleansed of all terrorist elements, securing its borders, and preserving its security and stability.