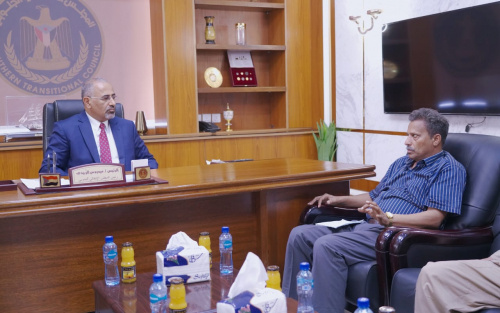 The President listened of Major General Abu Bakr Hussein to an explanation on the efforts of the local authority to normalize the situation in the areas that have been cleansed of terrorist groups, and the level of operational coordination between military and security units, to secure those areas and sweep mines planted by terrorist elements with the aim of impeding the progress of the Southern Forces.

The president affirmed his support for the efforts of the local authority to stabilize the situation in the areas that have been cleansed, stressing that the people of Abyan in general and the central region in particular, have suffered a lot from the extremist practices of terrorist groups and their discourse calling for violence, incitement, inhumane acts, and excommunication against their compatriots from the Southern Armed Forces, in the service of partisan forces that have nothing in its agendas but hostility to the South and its people.

To the end of the meeting, the governor of Abyan expressed his thanks and appreciation to President Al-Zubaidi for his support to the local authority to promote state of affairs in the governorate, normalize situation, maintain security and stability, and preserve public tranquility for citizens.