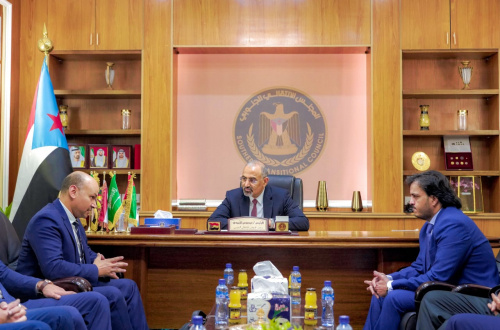 President Aidarous Qassem Al-Zubaidi, the president of the Southern Transitional Council (STC) and deputy head of the Presidential Leadership Council (PLC), on Tuesday, met with representatives of Madkour Company for Egyptian Engineering Projects headed by Mohammed Saqr, the commercial director.

In the beginning of the meeting, which was attended by eng. Mane'a Ben Yameen, Minister of Electricity and Energy in the power-sharing government, and eng. Abdul-Hakim Fadl, Undersecretary of the Ministry, the President welcomed the Egyptian engineering delegation, reviewing the bilateral relations of cooperation between our country and the brotherly Arab Republic of Egypt, and its active brotherly role alongside our people in various fields.

Then, the president listened from the head of the Egyptian delegation to a brief explanation on the activities of Madkour Group of Companies in Egypt, Iraq, Libya, and several African countries, in addition to their major contributions in the rising that has recently been taking place in Egypt, in projects of electricity and energy.

After that the president was briefed by the Egyptian delegation on a number of ideas and suggestions submitted by the group to develop the electricity sector in our country, and its willingness to build renewable power plants, and to upgrade lines of force in the electrical field of the electricity supply.

Furthermore, the president expressed his complete confidence in the Egyptian competencies and their ability to play an active role in the advancement of the electricity sector in our country, and to problem-solving of deficiency in the electricity supply through strategic projects similar to that ones recently witnessed in the brotherly Republic of Egypt.

To the end of the meeting, the Egyptian delegation offered thanks and appreciation to President Al-Zubaidi for the good reception and warm welcoming they have received, affirming that they will do their best to develop the electricity sector in our country as soon as possible.