Under auspices of President Al-Zubaidi.. Al-Jaadi and Al-Socotri participate in symposium on about the late Amin Saleh

Under auspices of President Al-Zubaidi.. Al-Jaadi and Al-Socotri participate in symposium on about the late Amin Saleh 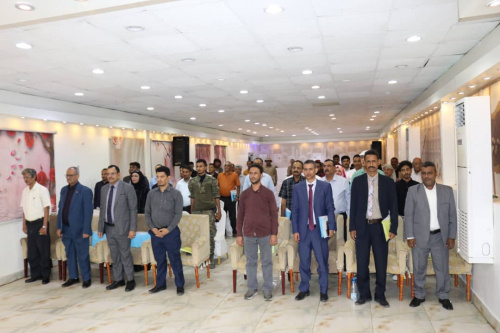 Mr. Mustafa Amin Salih, son of the deceased, delivered a speech to the family of the deceased, in which he thanked President Aidarous Qassem Al-Zubaidi for his sponsorship of this event and Mr. Fadl. Al-Jaadi for his contribution to its establishment and its success, noting that the deceased has done a lot, and the current time requires following in his footsteps, calling to stand by President Aidaros Al-Zubaidi in his efforts for the people of the south, their cause and their land, stressing that Amin Saleh's ideas, influence and what he presented to the southern revolution are a legacy that southerners must preserve and benefit from.

At the symposium, a set of papers were presented that reviewed the strategy of the late Amin Saleh in establishing southern tolerance and reconciliation and how he was able, with his views and ideas, to influence the southern revolution.

The papers were opened by Mr. Mansour Zeid, Head of the Organizational Department in the General Secretariat of the Presidency of the Council, who presented a paper entitled “The gathering spot of the freedmen, Amin Saleh, the architect of southern tolerance and reconciliation, in which he spoke about the most prominent events related to the liberation southern revolution and the role of the deceased in establishing revolutionary movements and national entities, including The Southern Transitional Council and its local bodies and the National Assembly, as well as the popular committees and others, and his efforts to establish and achieve southern tolerance and reconciliation, which embodied thought and behavior.

Mr. Fadi Baoum, Chairman of the Peaceful Movement Council, also spoke in the symposium about the characteristics of the deceased Amin Saleh and his prominent role in communicating with all southern political figures and components, including the leader Hassan Baoum, noting that the deceased was considered part of the family with his gentle morals and southern national revolutionary thought and style and his distinguished dealings, which made everyone who knew him admire his ideas and visions, and even if he disagreed with him, he could not argue with him, hoping that his ideas and strategies would become a beacon for future generations.

Eng. Ashraf Mohamed, Deputy Head of the Media Information Department in the General Secretariat and member of the preparatory committee for the event delivered the speech of the committee in which he reviewed the difficulties encountered in holding this symposium and the efforts made to hold it in a manner befitting the value of the deceased, expressing thanks to whoever participated in holding the symposium top of which is president  Aidarous Al-Zubaidi and Deputy Secretary-General, Mr. Fadl Al-Jaadi, stressing that work will be done on the outputs of the symposium’s working papers and their interventions to be a document that reflects the great value and distinguished strategy of the late Amin Saleh.

Eng. Ashraf also presented a paper on the foundations of the deceased in the application of southern tolerance and reconciliation, in which he reviewed the ways and means that the deceased followed in establishing this southern principle, touching on his efforts in communication and methods of persuasion that he used in order to achieve the principle of southern tolerance and reconciliation on the ground.

Dr. Fadl Al-Rubaie had presented a paper entitled The Late Amin Saleh in the Memory of History and an unforgettable page in which he referred to the importance of remembering the history and missions of the southern revolutionary figures and documenting their march, noting that the deceased Amin Salih was known that he was the thought of the Southern Movement and the basis of the spirit of tolerance and reconciliation through his struggles and efforts made by for the people of the south, their interests and their distinct revolutionary personality.

The symposium was opened by recitation of Quran and then the southern national anthem, followed by standing in mourning to read Surat Al-Fatihah on the soul of the deceased Amin Saleh and the souls of the martyrs of the south.