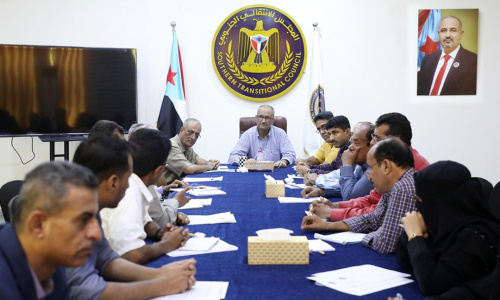 The secretariat began its meeting with a minute of standing to tributedly read Al-Fatiha for the soul of the martyr, Brigadier General Haddar al-Shauhati, the commander of the Fourth Brigade of Backing and Supporting Forces, who was martyred while approaching his immensely difficult situation heedless of danger in the face of the Houthi militias on the Yafe'a border front, and the martyrs of duty from our southern armed forces, who fell in the treacherous terrorist operations in Abyan and Shabwa governorates.

The meeting focused on the developments taking place in the capital, Aden and other governorates of the South, the most important of which is the educational issue, as the General Secretariat lauded the decision of the Southern Teachers Syndicate to resume the educational process after dealing with the issue by the Minister of State, Governor of the capital, Aden, Mr. Ahmed Hamid Lamlas, Secretary-General of the General Secretariat of the Presidency of the STC which comes in the interest of the future of the southern generation and keenness to contribute to building its state.