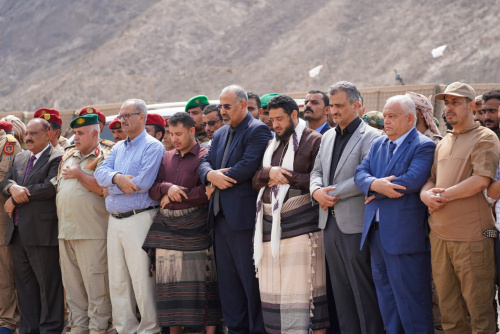 President Aidarous Qassem Al-Zubaidi, the president of the Southern Transitional Council (STC), Supreme Commander of the Southern Armed Forces, and deputy head of the Presidential Leadership Council (PLC), on Wednesday, led a solemn procession of mourners for the martyr Brigadier General Haddar Al-Shauhati, Commander of the Fourth Brigade of Backing and Supporting Forces, whose soul ascended to the Creater, in the cowardly treacherous targeting of the Houthi militia in the picketing front of Yafe'a in Lahj governorate.

The president performed the funeral prayer, on the martyr, accompanied by Major General Ahmed Saeed Ben Brik, Chairman of the National Assembly, the Secretary-General of the Presidency of the Council, Minister of State, Governor of the Capital Aden Mr. Ahmed Hamed Lamlas, Deputy Secretary-General Fadl Mohammed Al-Gaadi, members of the STC's Presidium, ministers of the STC in the power-sharing government, Major General Ali al-Bishi, commander of the Southern Land Forces, a number of southern military and security commanders, government officials, heads of departments and committees in the STC.

The president offered his sincere condolences and sympathy to families, relatives, and companions of the martyr, praised the heroic epics he has immortalized and the final sacrifices he made throughout his life, praying to Allah the Almighty to bestow His vast mercy and forgiveness on the martyr of duty, and to make his abode in paradise with the prophets and the truthful, and a goodly company are they!

After that, the solemn procession of mourners drove to Al-Fiyuosh area in Twban District of Lahj Governorate, where his pure body will be buried.