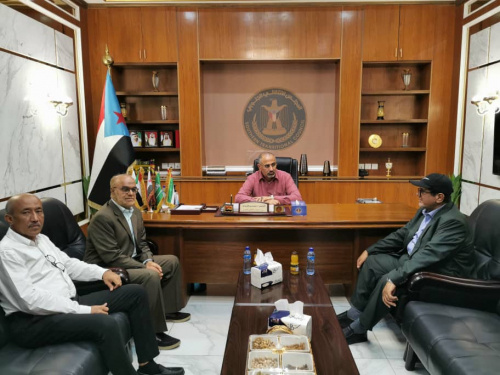 President Aidarous Qassem Al-Zubaidi, the president of the Southern Transitional Council (STC) and deputy head of the Presidential Leadership Council (PLC), on Sunday, met at his office, in the capital Aden, with captain Saleh Salim Ben Nahid, director general of Civil Aviation and Meteorology Authority (CAMA).

In the meeting, President Al-Zubaidi was briefed by Captain Ben Nahid on the conditions of airports and CAMA in the liberated areas and the stages that the authority has gone through since the decree to transfer and establish it in the capital, Aden, in addition to rehabilitating and operating all airports to be ready to serve citizens in all governorates, further to the projects that have recently been inaugurated and re-opened, and the projects that are scheduled to be implemented in the upcoming period.

President Al-Zubaidi lauded what has been accomplished by the authority’s headship, and its continuous endeavors to improve air traffic flows in the country, emphasizing the need to continue the incessant efforts in equipping all airports and boosting the service in line with the increased demand for air traffic in our country and the entire region.

For his part, Captain Ben Nahid affirmed the continuous and tireless endeavors to enhance prospects of cooperation with various airlines to resume journeys to different destinations and provide the required facilities in this respect to boost the economy and development in the country, praising the continued keenness of President Al-Zubaidi, and the high role of the Ministry of Transportation in supporting the efforts of CAMA in the current stage to achieve the goals and implement its plans.

The meeting was attended by Eng. Mohammed Nasher, deputy director of CAMA, and Eng. Yahya Al-Kaf, in charge of Technical Planning and Projects at the Authority.